Parades in Limerick call for ‘return to Republican ways’ 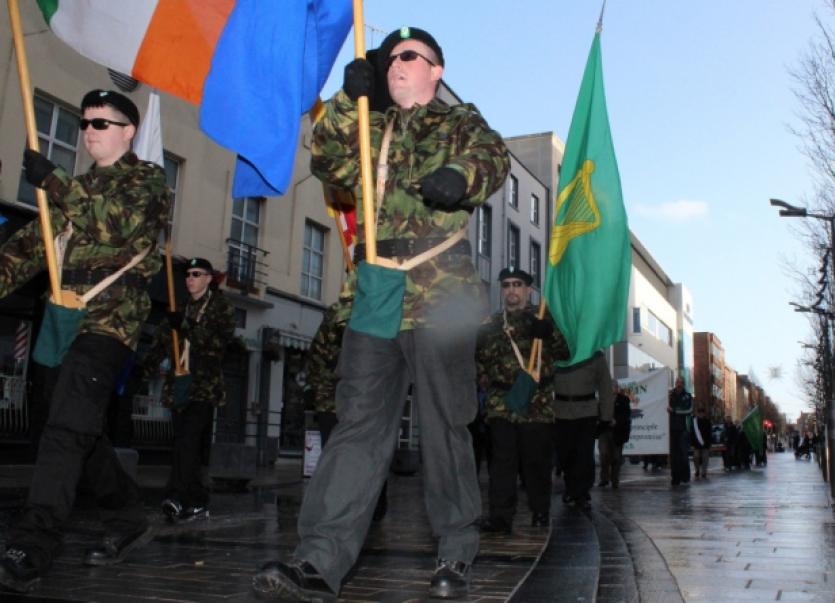 RENEWED calls have been made for a return to republican traditions at two commemorations in Limerick city over the weekend.

RENEWED calls have been made for a return to republican traditions at two commemorations in Limerick city over the weekend.

There was a strong turnout at commemorative marches honouring Garryowen man, Sean South, who lost his life during a raid on an RUC barracks in Fermanagh in 1957.

The marches, organised by Republican Sinn Fein (RSF) and Sinn Fein respectively, got under way an hour apart from Bedford Row on Sunday, and went to the Republican plot in Mount St Lawrence cemetery, Mulgrave Street.

She will stand for the party in this May’s European elections, and is also their Irish language officer.

A colour party drawn from all over the 32 counties led the RSF parade, which also saw attendance from the Irish Republican Voice Movement.

Those marching were backed by a bagpipe player, which fell silent as it progressed past Limerick Prison, where some republican prisoners are serving sentences.

Banners demanded the release of “republican prisoners of war”, while wreaths were laid at South’s grave by a number of groups, including Cumanns from Tyrone and Fermanagh.

RSF president and historian Seamus O’Suilleabhain described Mr South as an “icon of the Republican movement”.

He urged all Republicans to get involved in the 2016 centenary commemorations, saying: “It cannot be left to that government there at the minute who have every intention of turning 2016 into a British commemoration.”

Limerick man Joe Lynch, RSF’s national spokesman, said it is hoped that an anti-Good Friday agreement rally will take place in the city in that year.

“We hope to have all republicans, and non-republicans to join with us. We want anyone who is proud of their country to join us for one anti-Good Friday agreement commemoration,” he said.

RSF vice-president Sean Mac an Ghirr added: “We must renounce British symbols, whether they be poppies, flags, crowns, or cities designated as UK capitals of British culture. Many in this island mistakenly believe they are free while they are happy to regurgitate a West Brit culture while seeing nothing wrong in the partition of our land.”