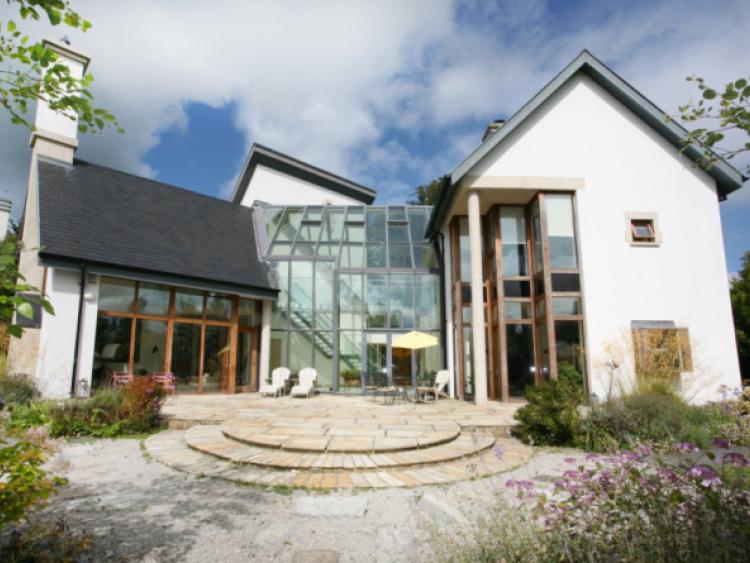 A FIVE-BEDROOM property with international designs on the grounds of the exclusive Adare Manor has gone on the market for €2.1m.

A FIVE-BEDROOM property with international designs on the grounds of the exclusive Adare Manor has gone on the market for €2.1m.

No 6 The Demesne, a two-storey property with five bathrooms, was designed by A & D Wejchert and Partners Architects, one of Ireland’s most successful award winning architectural practices and built by John Sisk & Son.

“The stunning light filled atrium is unlike anything you will have seen in a private residence to date,” said the agents, Sherry Fitzgerald in Limerick of the property, which has just been advertised today.

The kitchen - “a sublime mix of exquisitely crafted curved and angular individual pieces” - was designed by the Johnny Grey Studios, who have influenced the world of home design for the past 35 years and have been featured in Elle magazine and The New York Times.

Verney Naylor, one of Ireland’s most respected garden designers, is responsible for the wonderful diversity of plants and trees in the landscaped gardens that wrap around the house. The garden features a small apple orchard, herb area, a gazebo, a pond, modern glass house and a vegetable patch with pear trees to the side.

It’s understood the house is owned by a wealthy business family in Dublin, who used it primarily as a holiday home at weekends and during the summer.

The Demesne at Adare Manor is where 19 sites were sold in the past decade by Tom Kane, proprietor of Adare Manor Hotel, which too is up for sale for over €25m, for between €650,000 and €1.5 million each.

Winterwood, the best known house in the enclave, which was built for property developer Robert Butler, sold for in excess of €2m in 2012, a €10 million drop from its original asking price during the boom.

Property prices remain at a premium in Adare, regarded as one of the prettiest villages in Limerick.

A total of 95 properties have sold in Adare from 2010 up to the present day, according to details listed with the Property Price Register, the database of all house sales in the country since that date.