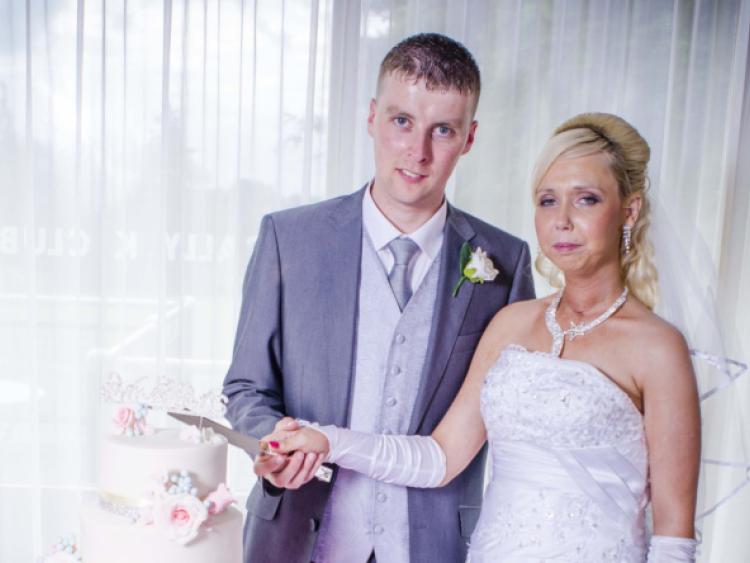 A TWENTY-FIVE year-old mother of one brought her wedding day forward by a year as she knew she was dying from tongue cancer.

A TWENTY-FIVE year-old mother of one brought her wedding day forward by a year as she knew she was dying from tongue cancer.

Four months later Elaine O’Brien (née Ryan) passed away at home surrounded by her loved ones in Nicker, Pallasgreen.

Despite her failing health she went out shopping with her aunt Hanora to buy Christmas presents for her family on December 19. Elaine died the next day.

“That’s the kind of person she was. She always put everyone else before herself.

“Every year she would put up the Christmas tree and lights for mum and dad [Eileen and Mike]. She was in Milford Care Centre but still came out in December to do it as a surprise.

“She came out again to us on Tuesday, December 17 and went shopping with me on the Thursday night. The next day she passed away,” said Hanora, who was like a sister to Elaine.

On the Monday before Christmas Elaine was laid to rest with the presents that were bought for her.

“We gave them to her a week earlier and told her to open them but she said she would wait until Christmas Day. She said she was really looking forward to them.

“We bought her jeans, jumper and pair of Ugg boots she was mad about. We put them into the grave with her,” said Hanora.

Elaine leaves behind her a beautiful young daughter Lexi, 4, and husband Pakie, whom she only wed in August.

The couple planned to get married on August 7, 2014 - the wedding anniversary of her parents. However, after her health deteriorated in mid 2013 it was brought forward to August 7, 2013.

She was only diagnosed with tongue cancer in May 2012.

“It started off like a little pimple on the side of her tongue. They told us in the hospital it is normally old people that would have been chewing tobacco all their lives that get it.

“It is very rare and especially in a young girl like Elaine who was 23 and a half at the time,” said Hanora.

She was put on high doses of medication and had a stomach tube inserted as she couldn’t eat. However, Elaine never complained.

“We would ask her if she was in pain and she would always say no. I used to go with her to her appointments and she would say, ‘No negativity’,” recalled Hanora.

After a haemorrhage in mid 2013 the doctors told Elaine they couldn’t do any more for her.

“They gave her the option that they could operate and take out the whole tongue and voice box but afterwards that she would be in a bed the whole time with tubes coming out of her with still no guarantee of life.

Seven weeks later Elaine was walking down the aisle in Nicker church with Pakie and their daughter Lexi as flower girl.

Due to the short time they had to plan the wedding a fundraiser was held in Miller’s in Oola and they got help from Clare’s Wish Foundation.

The Limerick charity set up by Doon man Kevin Clancy grants wishes to children and adults with life-threatening conditions or disabilities.

They provided a wedding car from Irish Diamond Limousines, church music by Nova Quartet and the photography by Black Diamond Photography.

“The wedding day was very special to Elaine because it was on the date she was always going to get married. She looked so beautiful and really enjoyed it. She organised it exactly the way she wanted it.

“If you didn’t know it you would never have thought she was sick. But we could see it in her eyes because we knew she was sick,” said Hanora.

After the high of the wedding Elaine’s condition unfortunately deteriorated rapidly.

But she always put others first. A talented writer, she penned a poem only two months before she passed which she knew would help bring peace to her loved ones after her death.

It was read out by a cousin, Heather Mawdsley, at Elaine’s funeral Mass and it had the whole church in tears. An excerpt is about God’s plan.

“He has one mapped out for you, so hold your head up high and go with the flow because what is around the corner any of us just don’t know, if your plan brings heartache and nothing but pain, dry your eyes and remember this - in heaven you have no pain.”

Hanora plans to frame the poem and place it on her wall.

Instead of gathering to celebrate Elaine’s 26th birthday on January 24, her family and friends will join together on the following day in Nicker Church for her month’s mind Mass.

On behalf of the family, Hanora wished to thank one and all for their support during this time and especially Jerry O’Sullivan, who travelled from Cork regularly to visit Elaine and was a great source of solace