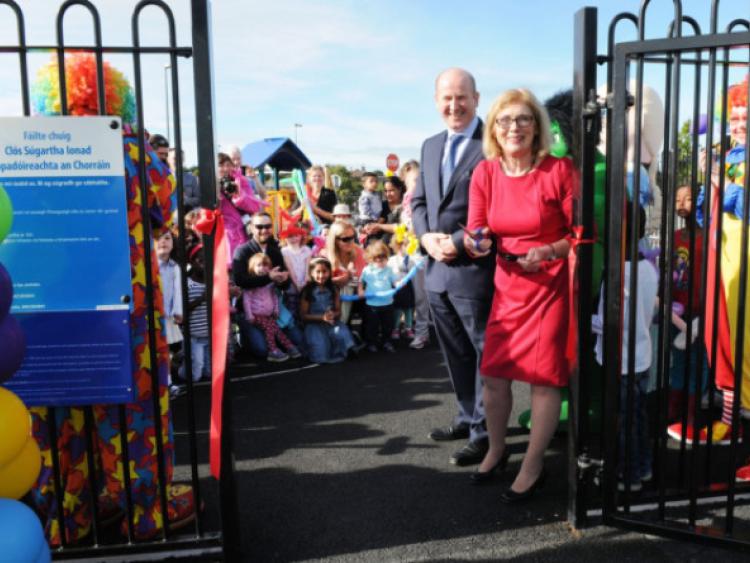 A €300,000 state of the art playground has been opened by the Crescent Shopping Centre by the Minister for Education, Jan O’Sullivan.

A €300,000 state of the art playground has been opened by the Crescent Shopping Centre by the Minister for Education, Jan O’Sullivan.

After detailed negotiations with Limerick City & County Council, the playground, measuring over 8,000sq.ft, was offically opened on Saturday.

It was developed following co-operation between Limerick City & County Council and the owners of Crescent Shopping Centre, Clancourt.

Clancourt said it is grateful to the council for their assistance in planning and developing the project, which “it is hoped will become a national model in best practice in the provision of an inclusive play space for children”.

“This state of the art playground represents a very significant investment by Clancourt and demonstrates their confidence in the local economy and their commitment to Limerick City. It also demonstrates the seriousness with which the Crescent Shopping Centre takes its social and community responsibilities.

“The construction of the playground is the first in what is hoped will be a series of initiatives from Clancourt to help boost Limerick city,” said a statement from the company, which employs nearly 1,600 people through direct employment over the past 40 years.

It is hoped that through the ongoing development of the centre, the rate of job creation can be improved providing a boost to the Limerick economy.

Conor Kenny, chief executive of Clancourt, said he wishes to encourage residents from Limerick city and beyond to use this “wonderful facility”.

“I hope this playground serves as a social outlet for parents and families and a place where the community can come together. We are always looking at ways to increase economic activity at the centre, including expanding and improving existing services and facilities for our customers and creating additional jobs at the centre. We are currently in the process of hiring a new marketing manager for the centre to help drive,” said Mr Kenny.