Garda probe in Limerick after mystery painting of ‘Jock’s Block’ 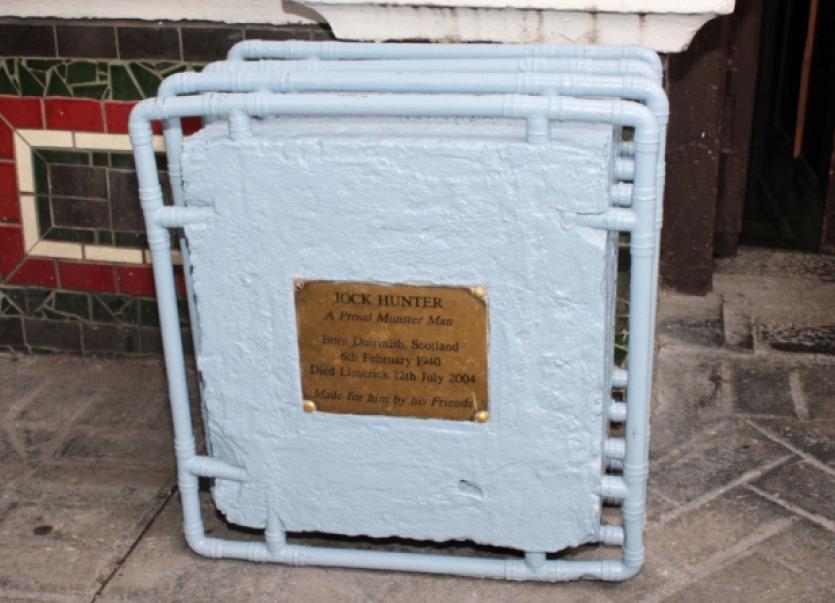 AN OFFICIAL complaint has been made to gardai after a memorial made from the ashes of a well-known Limerick figure was painted bright blue by a mystery man.

AN OFFICIAL complaint has been made to gardai after a memorial made from the ashes of a well-known Limerick figure was painted bright blue by a mystery man.

The stone block was positioned at the doorway of the popular White House bar on the corner of O’Connell Street and Glentworth Street nine years ago - a year after the death of Jock Hunter, a well-known raconteur and avid Munster supporter.

“This is a memorial and for all intents and purposes a grave. Some of his ashes are part of the concrete in the block - some of them are scattered on Thomond Park and the Millennium Stadium - and his urn is in it. It is also a recognised art piece,” explained Greg O’Shaughnessy - a friend of the late Mr Hunter - who was one of a group who designed and made the block in his memory.

“I’m determined that whoever did this will put it right,” he added.

Richie Byrne, manager of the White House bar said he has no idea who painted the block, and added that no permission was sought from him to carry out the work.

“Somebody came at 7.30 in the morning and painted it without any permission from us. I have seen him on the CCTV footage but I have no idea who it is. I don’t know if it’s a tradesman. He came along in his hi-viz jacket and got to work,” Mr Byrne explained.

The individual who is described as being of medium height and with a slim build, took his tools out of a plastic bag and used a pillowcase to cover the ground before he set about the task at hand.

The man spent an hour and 10 minutes painting the block and during the operation he took a number of cigarette breaks.

“Because there was no furniture out, he sat on the ground and he smoked. It didn’t look like he was trying to hide what he was doing,” said Mr Byrne.

“We are trying to solve the mystery of it. Somebody must know something.”

A formal complaint of criminal damage has been made to the gardai at Henry Street who say they are investigating the matter.

“We are not suggesting that the individual in the footage is necessarily acting with ill intent. We haven’t eliminated the possibility that somebody hired him to do it,” said Mr O’Shaughnessy who lives in Castletroy.

Prior to last week, the block had been white in colour with copper piping.

“The most that has ever happened to the block is that some drunk tried to pull it up the footpath and discovered it was far too heavy,” he added.