Anthony Foley’s stock will aid him in next Munster ‘exam’ 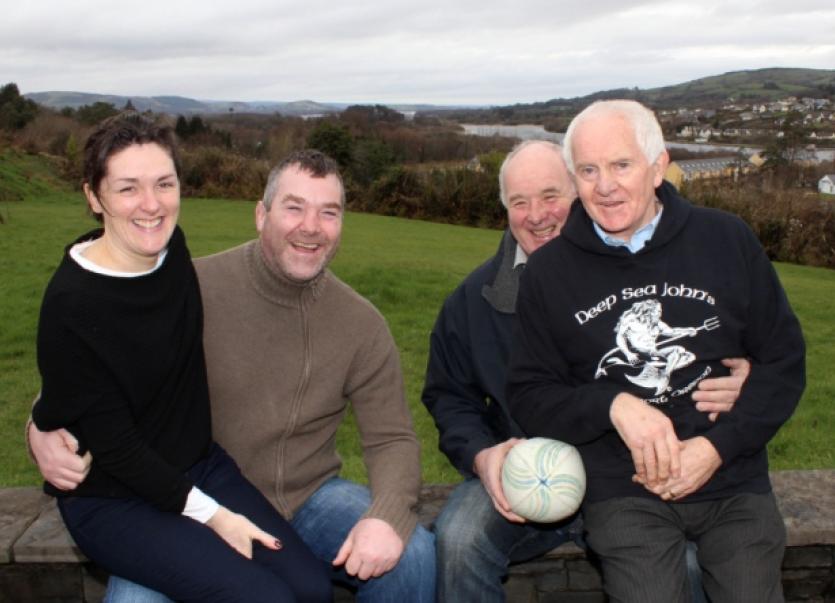 OVER 50 years of Irish rugby history is standing in Anthony Foley’s kitchen in Killaloe, laughter filling the room.

Foley and wife Olive, his dad Brendan – a member of the Munster team that beat the All-Blacks in 1978 – and close family friend Brian O’Brien – former manager of Munster and Ireland who trained both father and son for Shannon – are swapping war stories over a cup of tea.

The mood is joyful, celebrating the fact that Anthony, 40, is to become the first Munster manager of the professional era to hail from Limerick, albeit that admittedly Killaloe has been his home for 30-odd years, on July 1.

The Foleys have graciously opened their household to the Limerick Leader, and while the men pose for photographs, Olive casts a hand over the many cards that ring a bottle of Moet & Chandon on the granite counter-top.

“We have been inundated with cards, letters, phone calls and text messages,” says Olive. “I would say all these have come from every supporter that has ever lived! It is overwhelming nearly, the whole thing.”

You can see the future first lady of Munster Rugby is thrilled at her husband’s welcome promotion after rising through the ranks of schools, club, provincial and national rugby.

“I am over the moon,” she smiles. “It has been a long journey to get to this stage and I just wish him the best. He is going to make a good go of it now and he is so comfortable - even since it was announced and he was offered the job, he has been very laid back and very excited about it. That is the way he would deal with it.”

Anthony himself smiles at the excitement of the last two weeks, the messages of support that have flowed in from all over the world since he was confirmed as coach.

“The last time something like this happened would have been when I got capped for Ireland first – you get a bit taken aback by the amount of goodwill and the good wishes out there,” he says.

The difference between now and then, when he made his debut against England in Lansdowne Road in 1995, is technology.

“Sometimes it is hard to get back to everyone because you are getting messages on Facebook, Linked-In, WhatsApp, emails, texts, phone calls - back in ’95 it was either a letter or a phone call. Times have changed a small bit but everybody can get in touch with you these days, so it is all good,” he laughs.

The Foleys moved from Murroe, Brendan explains, when Anthony was only a nipper, five or six. Initially more into hurling, he took up rugby a bit later, but his proud father could never have predicted the route his career would follow.

“Even in the early days when we moved to Killaloe from Murroe at the time, hurling was his first game,” he says. “He just drifted back, they play all sports and even good players don’t go on to make good coaches. You couldn’t even dream of it.”

Educated at St Munchin’s, Anthony played with Shannon for his entire career and would collect 201 caps as a player for Munster, and 62 for his country.

Asked about the qualities that have made his son a good coach and now Munster head coach, Brendan says: “He has a good head on him. He knows what it is like to sit and watch teams play. It is very important to come up through the ranks. He will have that experience both as a coach and a player.”

Standing nearby and nodding, Brian O’Brien - who became Shannon’s first ever international player in 1968 - says Anthony has “been through it all.

“He hasn’t gone through some kind of a school or academy to learn anything from it. He has learned it from the grass roots. I think it is very important to be part of something that is indigenous and to me he is definitely indigenous to the game and to Limerick and he will have a lot of people who want him to succeed.

“He is a guy who makes friends rather than enemies, so I think he will do exceptionally well. Any players that come into him will absorb his honesty.”

Anthony admits he is still “getting my head around it now” and is concentrating on finishing the season as Rob Penney’s deputy, with daunting trips to Leinster and a home European Cup quarter-final against Toulouse to come.

Asked if he feels pressure, he says: “Currently? No! Currently the pressure is on the job we have in hand, trying to catch Leinster in the Rabo and getting ready for Toulouse. I think if you start looking too far ahead you will fall over what is in front of you.”

The likeable ‘Axel’ has a sensible head on strong shoulders that have carried his teams. There is a steeliness to him, but also a raw honesty. He admits he is excited about the appointment, yet honestly says he is “petrified”.

“It is one of those situations where ... it is like an exam really,” he admits. “It will be an exam for two years, hopefully three years, every week you are going to be tested.”

And yet he hopes the rewards will be great.

“Hopefully! Can’t guarantee anything, but we will try our best,” he laughs.