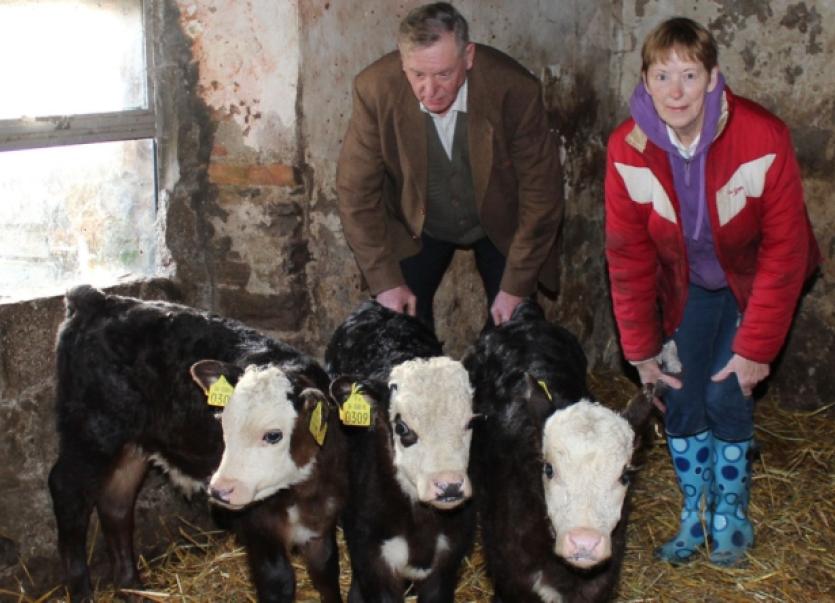 THE QUILTY family in Pallaskenry got an early Christmas present with three healthy calves all at once.

THE QUILTY family in Pallaskenry got an early Christmas present with three healthy calves all at once.

The odds of a cow having triplets are a whopping 105,000 to one but John Quilty’s Limousin cow beat those odds.

Seventy-four-year-old Mr Quilty said he knew something was up with the mother due to the size of her.

“I knew she was going to have twins at least, I knew by looking at her.

“The triplets are all bulls. Mother and family are doing well,” joked Mr Quilty.

They arrived just over two weeks ago and John didn’t even need the assistance of a vet to solve the puzzle of  12 legs.

“I was there. She probably would have calved them on her own.

“I brought up the front legs and she calved one, then there was another one and then another one,” said Mr Quilty, a suckler farmer.

The Hereford/Limousin crosses were nearly the size of normal single calves and afterwards the mother cleaned off like it was a single calf.

“It is her fourth calving. She is rearing the three of them and is a good milker.

“They are very early, they should be calving in spring time but I have them calving earlier,” said Mr Quilty, who is joined in the photo with the calves by his wife Una.

In his many decades of farming he said he had never seen triplets before.

Mr Quilty is giving the mother plenty of extra feeding to build up her strength and as the picture shows the calves are thriving.

County Limerick must be home to the most fertile cows in the world.

Last year Pete Murphy, Athlacca and Tim Shanahan, Garryspillane both had triplets on their farms.

But the mother of all records has to go to Ger Kirby, Ballyneety. His seven-year-old Friesian has had an incredible 16 calves in just four calvings.

She started her unheard of run with four calves when she was a heifer in 2009. She followed this up with quintuplets in 2011 but then took it handy with just twins in 2012.

But she was back to top form with another five calves in February of this year. What will happen this  spring?