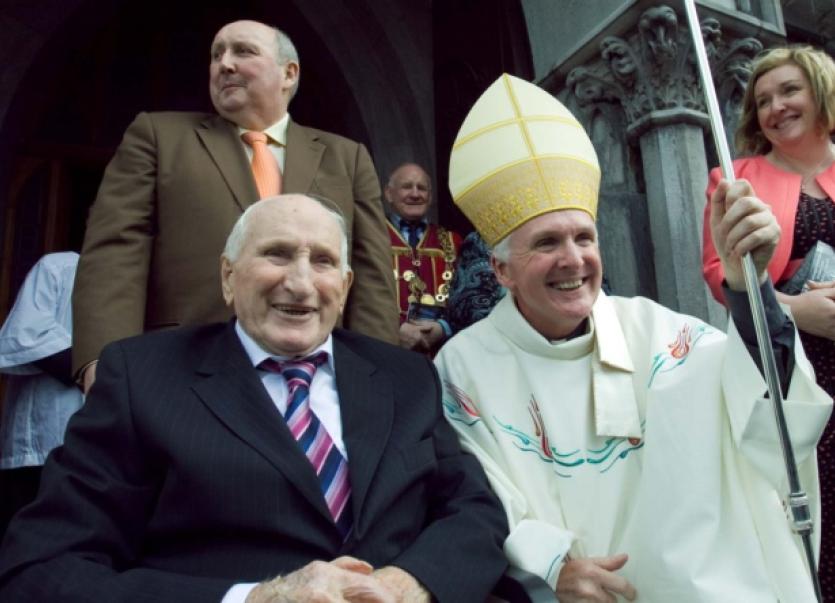 THE death has occurred of Maurice Leahy, father of the Bishop of Limerick Brendan Leahy.

THE death has occurred of Maurice Leahy, father of the Bishop of Limerick Brendan Leahy.

A native of Brandon Creek in west Kerry, Mr Leahy was laid to rest in Dublin this Wednesday on what would have been his 91st birthday. His son’s ordination as bishop at St John’s Cathedral in April was a source of tremendous pride. A teacher, Mr Leahy worked for a year in the 1940s in Athea and he was also a frequent visitor to Ballyhahill, where he had friends.

“My father enjoyed a long and reasonably healthy life and up to three weeks ago was up and about, walking with the aid of a zimmer-frame and enjoying life,” said Bishop Leahy.

“He unfortunately suffered a stroke three weeks ago and was very low since but passed away peacefully at the weekend at the Bon Secours Hospital in Tralee.

“He lived a good life and was a very good man. He was a huge fan of football, Kerry football in particular, and you could see the sporting discipline in him as he went about his daily life. He was loved by all who knew him and his relationship with young people, in particular, was remarkable. He was a very calm person, very wise, a man of faith and a really good example to all of us.

“He spent time working in Athea in 1949 and was a member of the Athea team that won the county junior football final that year. He always looked back very fondly on his short time there before returning to Dublin where he married my mother Treasa and they settled down to life in Rathfarnham.

“He was delighted to come back to Limerick for my ordination as bishop earlier this year. He was overwhelmed by the affection shown to him and I joked with him that he stole the limelight and he very much enjoyed that. We will miss him greatly but are blessed that he had such a long and joyful life.”

They settled in Dublin and raised a family of two girls, Maire and Treasa, and two boys, Tom and Brendan.