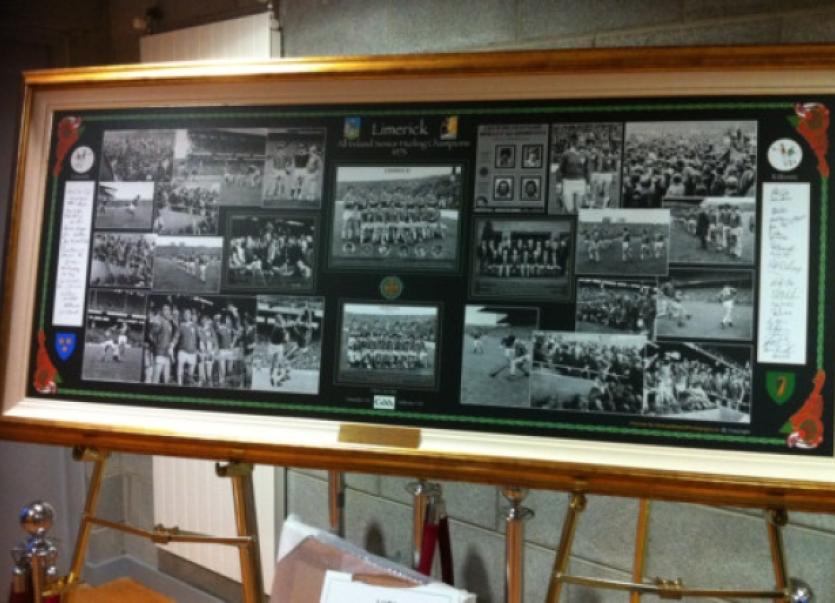 The current generation lifted the county on a sunny Sunday in the Gaelic Grounds, while their predecessors proved they are as popular as ever in Kilteely on Friday.

Months ago, John Franklin, Knockane, came up with the idea of celebrating Limerick’s All-Ireland winning heroes 40 years on.

Retro jerseys, hurleys and sliothars were signed by the team for charity. The event mushroomed and a cake sale, quiz and 5k run took place.

Others donated prizes including Michael Martin’s framed montage of photos from the final; Sean Foley gave his All-Star jersey and Ed Shanahan made a special hurley with a photo of the team on it.

The event culminated with the auction and raffle in Ahern’s in Kilteely.

Conor Fitzgerald, former dual Limerick star, paid €1,000 for the framed photos and €425 for the signed hurley.

“He told me he had them hanging proudly in the Woodlands first thing Saturday morning. There was a fine crowd and bidding was fierce,” said John.

The second highest bid was from Limerick GAA author, Henry Martin. He paid €520 for the signed jersey.

From all the events, John says they will have over €13,000 to divide between the three charities - Daughters of Charity, MS Limerick and Milford Hospice.

“It was great meeting all the players and hearing all the old stories,” said John, who thanked all his committee, and hopes the new generation continue to write their own story.