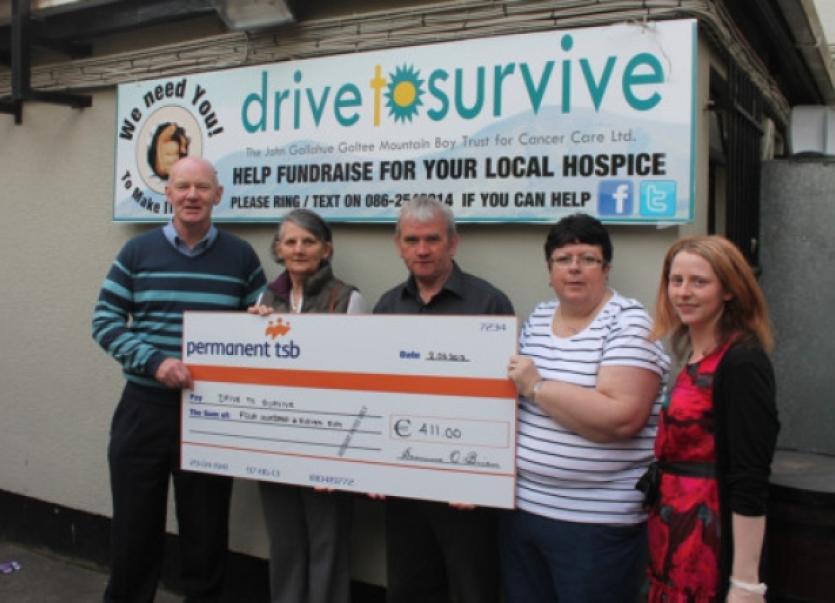 WITH just eight weeks to go before they rev up their Model T pick-up trucks and head off around Ireland, the Drive to Survive campaigners have raised over €30,000 for hospice care.

WITH just eight weeks to go before they rev up their Model T pick-up trucks and head off around Ireland, the Drive to Survive campaigners have raised over €30,000 for hospice care.

The Drive to Survive Campaign which is being spearheaded by Dan Gallahue, the son of the late John Gallahue from Ballylanders who was cathaoirleach of Limerick County Council, has been urging communities across the country to host fundraisers to raise funds for cancer patients.

The main fundraising event for the Drive to Survive campaign will take place from August 9 to 15 when volunteers take two 1920s Ford Model T cars across 26 counties over seven days covering 1,013 miles. The group will be collecting money for the cause along the route. A number of presentations of monies raised by different groups were made in Gallahue’s Bar in Ballylanders last week.

A presentation was made by Margaret O’Donnell in Ballylanders totalling €411 – the proceeds of a coffee morning held in the day care centre.

Local councillor Eddie Ryan and John Denihan presented a cheque of €855 which was raised as a result of a recent table quiz held in O’Connell’s Bar in Galbally.

Finally a total of €10,311.03 was presented by Anglesboro Community Council. The impressive sum was raised from a fundraising blitz on the Easter Bank Holiday weekend. The next event is a race night on Saturday night in The Tavern in Mitchelstown at 9pm.

Meanwhile, a monster table quiz takes place on July 4 in the marquee in Kildorrery starting at 9pm. There will also be a coffee morning at Tig Roy’s in Galbally at the end of July. For more details email dan@drivetosurvive.ie or call Dan on 086 2549014 for more details.