Community turns out for opening of new school in Kilfinane 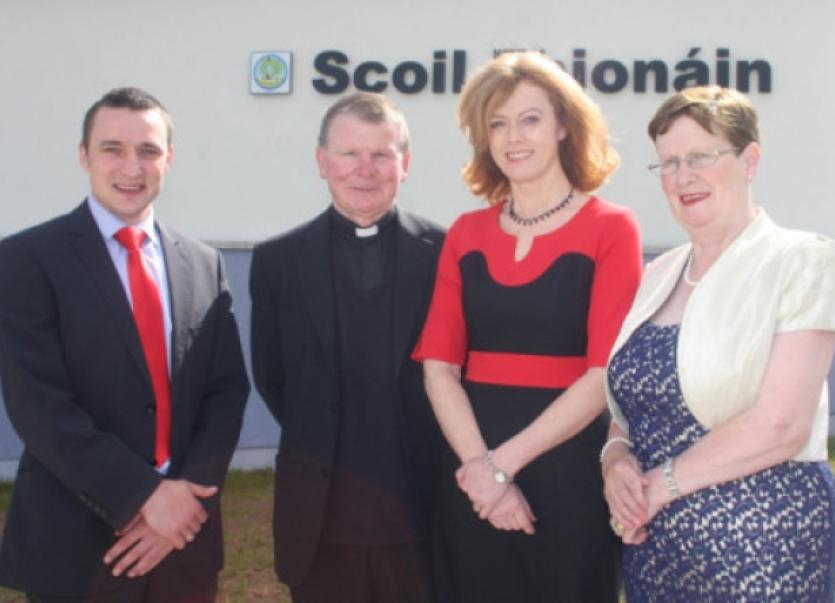 A NEW chapter in education has been marked in Kilfinane with the official opening and blessing of the town’s state-of-the art primary school, Scoil Fhionain.

A NEW chapter in education has been marked in Kilfinane with the official opening and blessing of the town’s state-of-the art primary school, Scoil Fhionain.

Fr Michael Hanley, PP, Kilfinane performed the blessing and lead the opening ceremony which was attended by students, staff, parents, and representatives from various groups and organisations in the parish.

“It was very much a parish and community-led occasion,” said Siobhan O’Flynn, school principal. “All parents were invited and those who could attend did. All members of the community were invited. Representatives from various groups and organisations in the parish were in attendance along with principals from schools in the area,” she explained.

Guests were treated to a musical performance by the local children who were accompanied by the school band who performed under the guidance of music teacher, Joan Slattery. “The students were all involved in the ceremony, they all had some role. Every class was involved in a prayer and singing,” said Ms O’Flynn.

The Bishop of Limerick, Brendan Leahy was unable to perform the official opening and sent his apologies. The Department of Education also sent their apologies.

Last September the students moved into the state-of-the art school - one of the first of its kind to be built in the country. The former school building which was in use up until the summer holidays of last year was more than 100 years old. It had only outside toilet facilities. The new school is built in blocks of two classrooms which are connected by a shared toilet area in between the two classrooms. The toilet area includes a wheelchair accessible toilet. There are also staff and visitor toilets.

Each classroom opens out into the yard and outside each classroom there is a paved area and a teaching garden. There is also a BMS monitor - a child-friendly touch screen display board to allow the children to check the temperature and the levels of carbon dioxide within their classrooms.

Other facilities include a large general purpose room, a staff room - which the teachers didn’t have previously - and modern resource rooms and learning support rooms.

The new school hit the headlines last November when sub-contractors took furniture from the school as a result of a dispute with their main contractor over payment. A total of 153 students are now enjoying the surroundings of their new school.