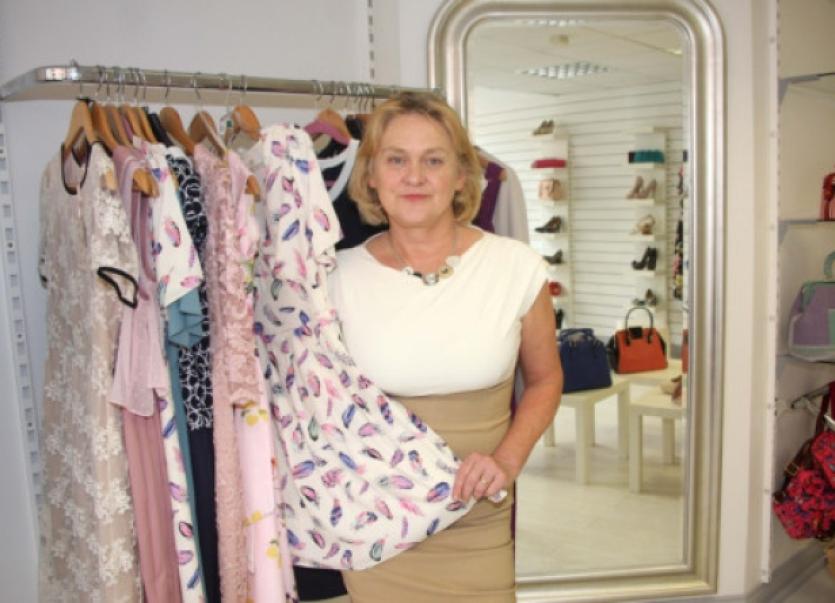 GROWING up, funnyman Jon Kenny had a huge interest in fashion.

GROWING up, funnyman Jon Kenny had a huge interest in fashion.

His mother, Mary, ran a clothes shop in Hospital –Kenny’s Arcade – for the bones of 60 years before Jon’s wife, Margy, took over the running of the business almost two years ago.

This Thursday marks the start of a new chapter in the Kenny family business with the opening of Raspberry Red in Bruff.

“Bruff is a buzzy spot,” said Margy this week of her decision to open a shop in the town. “There is good parking and it’s always busy with Nagle’s and the other shops.”

Raspberry Red is located in the building formerly known as Quilty’s – thus carrying on the tradition of selling clothing. The shop will cater for all sizes and tastes, stocking many labels associated with occasional wear including designs from The Pretty Dress Company - making it the only shop in County Limerick to stock the popular brand.

Raspberry Red will also stock accessories including jewellery and shoes as well as uniforms for the primary school in Bruff and the secondary school in Hospital.

The plan is to continue stocking school uniforms in Kenny’s Arcade in Hospital for the two locals schools while developing the business into a shop specialising in plus-size clothing catering for size 16 up to size 28.

“You have to try to find some kind of niche for things people aren’t getting in the city,” Margy explained.

“It is not viable to have exactly the same stock in both shops as they are too close. I have done a lot of research and seemingly people who want plus-size clothes will travel if they know they will be catered for. Hopefully it will work out.”

While initially, Margy began “babysitting” the shop in Hospital when Jon’s mother Mary took some time off, she soon realised she had a passion for it.

“I found that I really enjoyed it. I love meeting customers,” she explained.

The shop in Hospital is where her husband Jon – most famous for being one half of D’Unbelievables – was reared. Jon’s late father, John, who worked for a time in the drapery business in London, purchased the property for his wife Mary and also opened a public house across the road around the same time.

“John was from Athlone, Mary is from Ballinasloe. They met in London,” Margy explained.“At that time there was a big Co-operative store in Herbertstown. There was a big drapery section in that and John got the job as manager and that’s why they came to Hospital.”

Sadly, John died suddenly at the age of 42 leaving Mary with five children to rear on her own – the youngest of which was just a year-and-a-half at the time. Jon is the second youngest.

The pub was sold, but Mary held on to the drapery store.

“She reared the family on it,” said Margy, a mother-of-two. “It started off very much as a drapers. Back then, the clothes business was so different, people didn’t go into the city.”

Mary ran the shop for 60 years before retiring two years ago. She now resides in County Clare.

“She is hugely interested in fashion and clothes. She kept the business going and that’s what kept the family going. Jon actually grew up with a huge interest in clothes,” said Margy.

Both shops will be open from Tuesday to Saturday from 10.30am to 5.30pm with late opening on Friday to 6.30pm.