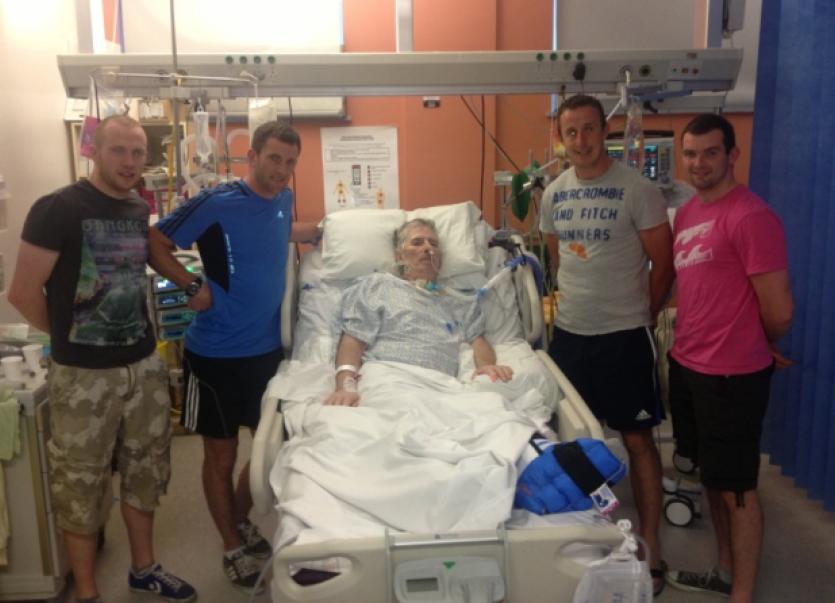 NO MATTER what happens on August 18 in Croke Park the Limerick hurlers are still the best in all Ireland say a county family.

NO MATTER what happens on August 18 in Croke Park the Limerick hurlers are still the best in all Ireland say a county family.

John Mangan, from Manister, was left paralysed from the neck down after contracting a rare virus called Guillain–Barré syndrome.

There are only one to two cases per 100,000 people annually. A well known carpenter, Mr Mangan, 64, has been in Limerick University Hospital’s intensive care unit (ICU) since June 1, not able to eat and barely able to talk.

However, you won’t hear any complaints from John as he battles the terrible condition.

“He got a fantastic boost from it. He was concentrating hard on the portable TV to watch it all. He really enjoyed it,” said Amy.

John’s nurses in ICU saw this and hatched a plan. The following Friday night around 9.30pm Donal O’Grady, Wayne McNamara, Niall Moran, Tom Condon and team assistant Ger O’Connell quietly slipped into the hospital with a signed sliothar from all the team.

“I only got a phone call on Thursday that the nurses got in touch with them and they were going to do it for dad. We didn’t say a word to him so it was a total surprise.

“He knew exactly who they were. The minute they came in he went, ‘Oh my God’.

“They spent a full half an hour with him. They picked up his hand and they shook it because he can’t lift his hands. They were four lads who didn’t stand back, they were not one bit shy. Wayne had even worked with him when he was a youngster doing an apprentice.

“Dad uses a speaking valve that goes down into his lungs. Every time he says a word he has to take a breath.

“They were all chatting to him and they could understand him. It was brilliant,” said Amy, who was joined by her mum Goretti and brothers Patrick and Owen for the special occasion.

“Of course we were all waiting for them as well and he was wondering why we were waiting around,” said Amy.

Like when he watched the Munster final, Amy says the surprise visit has given him a big boost.

“It happened on the June Bank Holiday weekend when he got a fever. He was going to a wedding the following day and a long drive to Dingle so he said he would go up to bed and get a good night’s rest.

“At 12 o’clock he asked my mother for paracetomol because he was hot and by 3am he was in casualty.

“Following there he went straight to ICU where he has been since. It is devastating what happened to him,” said Amy. John faces a long road of recovery but with his spirit it is hoped he will be out of ICU in the near future.

“He is fighting it, he has had pneumonia, he has had kidney failure, he has been through the mill but he keeps fighting,” said his proud daughter. On behalf of her family she wished to thank the nurses for their generosity and kindness to think of her father.

“They have enough to be doing, and for the hurlers to visit during a very busy week for them - it was fabulous. And a big thank you to friends, family and neighbours who have sent best wishes for dad. And for their great support during this difficult time,” said Amy.