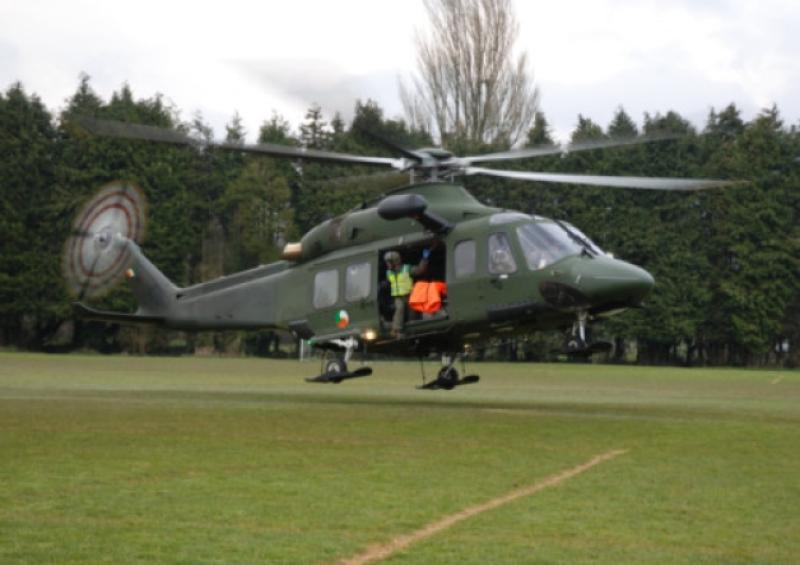 Less than an hour after a match on Cappamore Celtic FC’s pitch ended an Irish Air Corp helicopter landed on it on Easter Sunday.

Less than an hour after a match on Cappamore Celtic FC’s pitch ended an Irish Air Corp helicopter landed on it on Easter Sunday.

For the second time in just over a month a helicopter was called out to an East Limerick pitch to transfer a person in a medical emergency to the Mid-Western Regional hospital.

The first was on Doon GAA’s pitch at the end of February. Both men are understood to have had suspected heart attacks.

It is believed the man who fell ill at the weekend is from just outside Cappamore and is aged in his fifties. He is recovering in the Regional hospital. The Emergency Aeromedical Service is based in Athlone where the helicopter flew from.

It is jointly run by the HSE and Irish Air Corp.

Keen local photographer, Joseph Keogh, took these pictures of the landing and take-off which drew dozens of people back to the pitch.

Mr Keogh says he always carries his camera with him as you “never know what you are going to get”.

“It was around 5.45pm. There was a match on around 45 minutes before that.

”Everyone was gone but people started pulling up in their cars to see the helicopter when they saw it overhead,” said Mr Keogh.

He said the transfer from the ambulance to the helicopter went off without incident.

“The paramedics and pilots worked very quickly. It was only on the ground for less than 10 minutes. One of the pilots came out to the people that were watching. I asked him did he mind me taking photographs and he said no,” said Mr Keogh.

The pictures shows the scale of the helicopter. You can even see the skis on its landing gear as it was used when the Irish Air Corp deployed helicopters to Northern Ireland last week to assist with snow-relief efforts.

Another local said: “It was amazing how quickly the whole thing happened. We saw it in the sky, it landed and before you knew it was up in the sky again.

“Hopefully he is OK and recovering well.

The Emergency Aeromedical Service, which was started last June, is running on a 12-month basis in order to ascertain if Ireland requires a permanent air ambulance service.

They have responded to many call-outs in County Limerick.

When it was launched, Minister of Health Dr James Reilly said the pilot programme would allow the HSE to determine exactly the extent and type of airborne medical support that would be required on a longer-term basis.