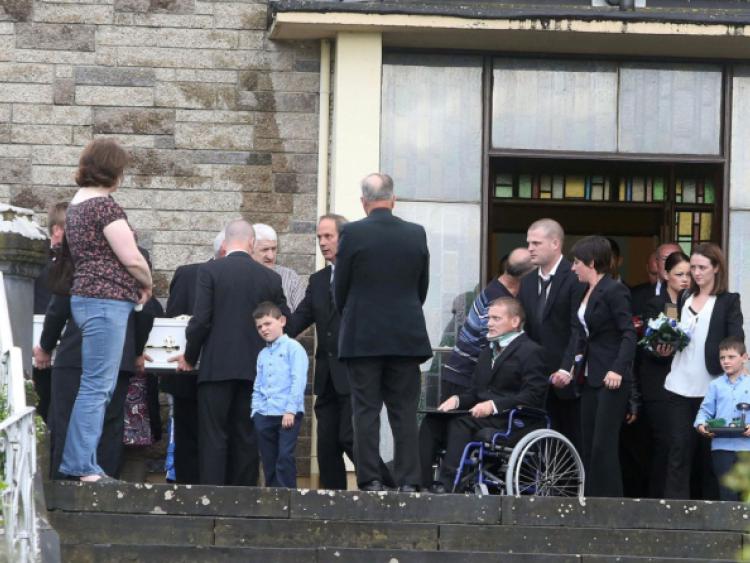 Even though Jack McDonnell Cummins’ life had scarcely begun, he has left behind a treasury of love and precious memories, said Fr Tony Ryan.

Even though Jack McDonnell Cummins’ life had scarcely begun, he has left behind a treasury of love and precious memories, said Fr Tony Ryan.

The four-year old was laid to rest in the local cemetery in Doon last Friday after Mass of the Angels. Jack was a back-seat passenger in a tragic road accident that took place near Lough Gur on Monday, July 22.

Hundreds of mourners attended the removal and Mass.

The funeral Mass was delayed to allow Jack’s seriously injured dad, John, attend. His fiancé Carmel Cummins sat beside him and their six-year old sons, Séan and Philip.

Fr Ryan told the twins they were “brave little boys” and to heartbroken parents, John and Carmel, said: “We can take consolation that Jack has gone straight into the kingdom of God”.

“The kingdom where little ones have immediate access. No password required, no passport needed. Little children walk straight in and begin to play in the face of God. Jack is a little angel today,” said the Doon parish priest.

The loving family had been enjoying each other’s company when tragedy struck.

“When you reflect on a young family out together for a little picnic, enjoying the beautiful weather and the scenery, and for it all to end so abruptly. In trying to come to grips with Jack’s death, we must acknowledge there are no easy answers,” said Fr Ryan.

There is something unreal and inconsolable from our parting from Jack, he said.

“It’s such a sad experience, that it goes against the grain of nature and the rhythm of life itself. Few burdens are heavier than the coffin of a little child and for the parents and brothers walking behind,” said Fr Ryan.

The church in Doon has seen many sad funerals, but fewer more profoundly sad than last Friday, he added.

Séan and Philip placed a rugby ball, hurley, teddy bear and a toy rhino by their brother’s white coffin. His christening garments, cup and candle were brought to the coffin by a young cousin. Friends poignantly offered Jack’s mother a toy tractor as a gift for Jack to play with in his next life.

Fr Ryan spoke of Jack’s love of his mum and dad and his brothers, calling in to see his grandparents, and his great grandmother. “Giving love and sharing so much love with everybody. Always remembered as a happy, smiling, cheerful little boy.”

Fr Ryan said the McDonnell Cummins family could always depend on the support of the local community which had rallied around them in their time of much need.

“A treasury of love has opened up since he has died, and all of us have shared in that. We experienced it in the coming together of so many relatives, neighbours and friends. The prayers that were said, the support given. All reaching out to each other, especially to his family, with wonderful acts of kindness. Bringing the cakes and sandwiches and refreshments and helping with arrangements and digging the grave... And so many ways.”

As little Jack’s coffin was taken from the church, his father’s heart-wrenching loss was symbolised by the Luther Vandross song Dance With My Father.