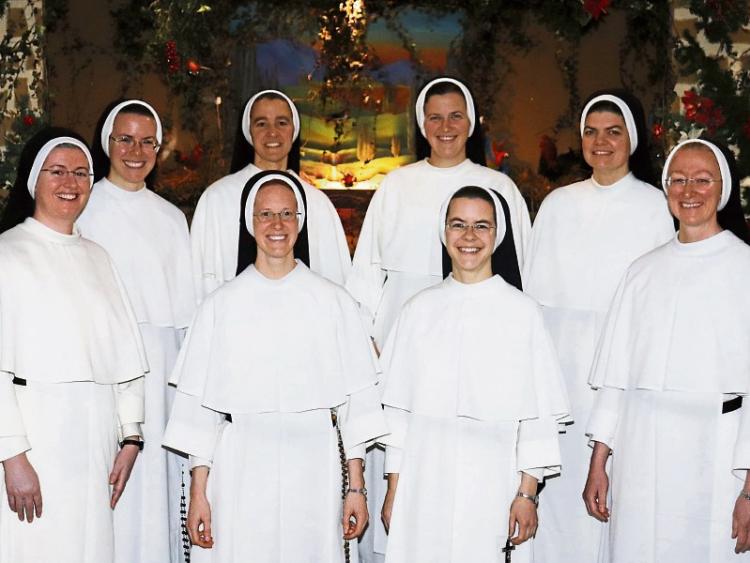 CHRISTMAS shoppers, festive revellers and indeed hill climbers looking to shed the December pounds may have had to do a double take when out and about, with a number of nuns present.

The Dominican Sisters of St Cecilia, referred to as the Nashville nuns by many, met en masse over the sacred season, with sisters descending on Shannonside from Elgin in Scotland, Sittard in the Netherlands and much further afield.

Founded in Tennessee in 1816, the order came to Limerick two centuries later at the request of Bishop Brendan Leahy.

A young group of sisters, mainly in their 30s and 40s, they replaced the order which moved out of the Dominic Street church that same year, following an emotional Mass.

Three sisters are based in Limerick permanently: Sr Mara Grace, who hails from Kentucky, plus Sr Rose Miriam and St Caitriona Kavanagh, the only Irish nun, coming from Co Wexford.

However, over Christmas, their number swelled to more than 13 religious , as the order gathered here.

Sr Mary Amata, who hails from New York and is currently serving in the Netherlands, said: “We have European missions in Scotland, Italy and the Netherlands. Community is very important to us. We decided to get together all in one place. Limerick has been a great choice for us. It’s natural we all converge.”

Sr Angela Marie, who came from Elgin, said Limerick is more comparable to Glasgow than the town on the east coast of Scotland.

“Elgin is very small. It’s more like a small town. You walk everywhere. Everywhere you go, you recognise people you know pretty much. Walking through the town, you’d wave at people you know. Whereas Limerick has more of a city feel. I don’t think in Elgin, we have any buildings more than three storeys high. Limerick might be more similar to Glasgow perhaps,” Sr Angela said.

As well as exploring the mind while here, the sisters have also given themselves a physical workout by climbing Croagh Patrick, Sr Angela admitting “I’m still aching from it!”

Sr Mara Grace added: “We have had outings to Galway and Knock. It’s time for us. We are all very involved in active working ministry, so for us, it’s a time to break, reflect and enjoy.”

Quite uniquely, as the flame burnt out on 2019 and a new decade was ushered in, the sisters spent New Year’s Eve in silent reflection, and thankfulness of what the Lord God has done for them over the year, as well as to look for hope.

“People often wonder, how can you be with so many people and not talk. It’s a beautiful experience to all be united in heart,” Sr Mara said, “We have adoration of the blessed sacrament all through the day. We each take a different section to adore the Lord.”.

Sr Angela said: “I went on two nice walks that day. On the second one in the afternoon, as the sun was setting over the river, we were passing on the bridge. We kept passing each other back and forth, each reading a book. I thought this must have looked so funny. As we obviously know each other. We are obviously sisters. We looked quite friendly with each other just to not weird people out when we passed. But we were definitely in silence enjoying the swans and the families as the sun setting.” The sisters have a strict daily routine, which sees them on the move from dawn to dusk.

Sr Mara said: “Usually we get up at 6am. We go to our chapel and have time in silent prayer. Then we pray what’s called the Divine Office. Religious lay people around the world would pray the same prayer. We would go to the Augustinian’s for the early Mass. We’d eat our meals usually in silence. It’s because as we are being fed visually, we are also being fed spiritually. Then we’d go about our work. I’d be here at the Parish, one of the sisters is in the Chaplaincy at Mary Immaculate College. One is the advisor for primary schools in the Diocese, so she is visiting primary schools throughout the year. Then we’d come together for a time of prayer, and have recreation, family time, where we might play a game, or chat. We end of our day with going to the chapel and giving it all the Lord. We’d usually be in bed for 10ish.”

While Sr Mara grew up in a religious home in Kentucky, it was not until the age of 20 that she realised God had a plan for her.

“I can identify several moments of grace through my life. Little hints or clues that I may have been created for this life. But I’d say it was more of a gradual discovery. There are times when I can pinpoint that I experienced the Lord here and here. But it was more of walking in his faith and discovering his will,” she said, “If you had asked me 10 years ago if anyone in my family had been a priest or nun, I’d have said no.”

Before that, Sr Mara was at university studying liberal arts with a view to becoming a teacher. Her brother Hugh is a Benedictine monk in Oklahoma.

The sister has no regrets coming to Limerick, despite never having resided in the Treaty City before.

“The people here have made it like home for us. We have found open hearts. Sometimes we will go and visit Spanish Point and wave at America, but we feel at home here,” she concluded.