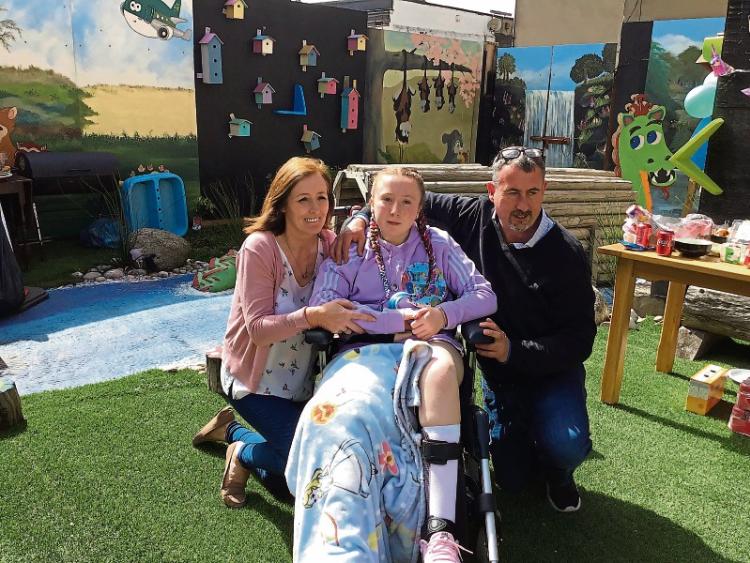 THE PEOPLE of Limerick are being called on to help transform the home and life of a young Limerick girl.

RTÉ’s DIY SOS is coming to Annacotty this Wednesday for their Trades & Suppliers Day in efforts to gather volunteers for the renovation of thirteen-year-old Amy Mulcahy’s home.

Amy was left brain-damaged following a rowing accident in early 2019, and her family will be the second family to feature on the show presented by Baz Ashmawy.

When her boat overturned suddenly, Amy became trapped underwater for several minutes and while she was resuscitated, Amy had suffered cardiac arrest.

Her family were given little hope of her recovery, with doctors informing the Mulcahy’s that Amy would never see, speak or walk again.

Since the accident, Amy has regained her sight and her speech and is determined to walk, though she lost some use of her limbs from the waist down and now uses a wheelchair.

The house which Amy shares with her mother, older brother Calum and his toddler twins is simply not suitable for any of Amy’s needs.

As she can’t access the upstairs of the house, the family sitting room has had to become Amy’s bedroom, and she is currently without access to a bathroom.

Amy’s parents and all the family desperately want Amy to have the space to live with dignity at home and try to continue her rehabilitation, but right now they feel the house is making that impossible and further disabling her.

The family’s hopes are for a small extension to the back of the house to try and give Amy some dignity with a downstairs bedroom and wet room – and of course an accessible space where she can also have her privacy when needed and live as normal life as possible.

The show is calling on the invaluable help of trades and suppliers in the community, in the county of Limerick, and right around Munster and Ireland to come together to make this happen.

The Trade & Suppliers day is being held from 9am-4pm in The Tophouse, Main Street, Newtown Annacotty, Limerick, V94 N66X (across the street from the Mulcahy's housing estate).

“We use this day to meet the volunteers that have come forward and contacted us expressing an interest to help - but it also allows us to figure out who can commit and how many days they can offer,” said DIY SOS’s Sharon Newman, “from that turnout, we know if we are short in numbers for certain trades (we always are somewhere!) and so we can put out targetted callouts for what's missing in the jigsaw!”

To get involved, please email your details to diysoslimerick@motive.ie  or call 01 5313306 to register for the day.

As a series, DIY SOS is famous for bringing out the very best in people and the best community spirit.

In every episode an army of volunteer builders, labourers, trades, suppliers, friends and neighbours come together giving their time, labour and materials for free to help a local family whose lives have been impacted by a significant loss or misfortune – but together, the DIY SOS team and local volunteers, can make a house a home again.