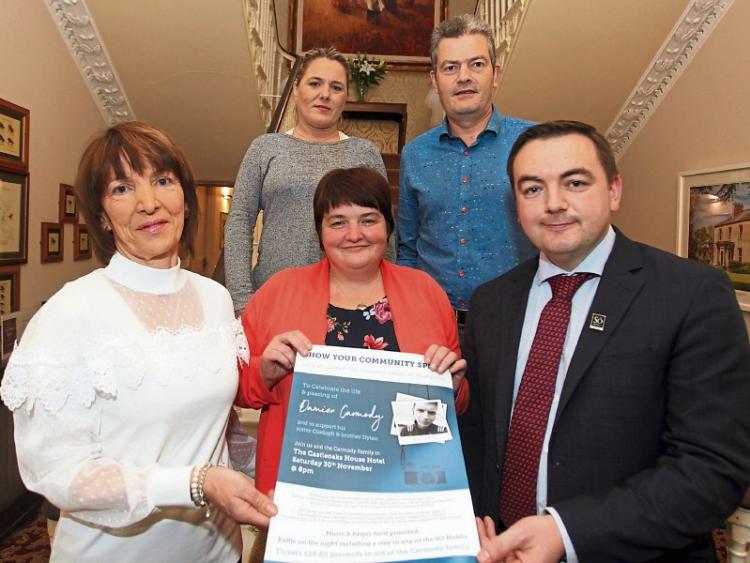 FRIENDS and neighbours have come together to celebrate the life and passing of Damien Carmody.

The 18-year-old died peacefully at home in Montpelier last March. The popular and talented teenager had an illness known as chronic pain syndrome.

Dolores O’Connell, Mairead Fanning, Donna O’Rourke and others are working together within the community to try and raise funds for the Carmody family.

They are hosting a fundraiser on Saturday, November 30 in the Castle Oaks House Hotel to honour Damien’s memory and also to support his parents - Shirley and Ger - at this difficult time

Shirley said her eldest son suffered with chronic pain over a period of eight years.

“It is a disease of the central nervous system. It is defined as ‘pain without apparent biological value that has persisted beyond normal tissue healing time’. Damien suffered from endless aches and pain which affected his mobility.

“This horrendous illness often caused Damien to be unable to walk and he even on occasion passed out in school due to the pain. Damien suffered horrendous pain which would often prevent him from making it up to his own bed at night,” said Shirley.

Damien was admitted to Unit 5B on the grounds of University Hospital Limerick before Christmas as he was severely depressed.

Shirley said this was more than likely a result of all the medication he was on due to his illness.

“Damien had a great love of many things including planes and buses but his first love was photography. Damien had a large circle of friends and family and in particular had a fantastic relationship with his grandad Mikey,” said Shirley.

Damien’s bravery was displayed when he gave a moving eulogy at the funeral Mass of his beloved grandfather last January. Tragically, Damien was laid to rest beside Mikey in O’Brien’s Bridge cemetery in March. Shirley buried her father and son in those two terrible months.

Shirley is now very worried about her two other children - Clodagh and Dylan.

For the past three years Clodagh, aged 15, has begun to present with similar symptoms to Damien, crying with pain in her wrist, fingers and up through her arm. Clodagh is a beautiful singer and sings every week in the choir in St Joseph’s Church, Castleconnell.

Damien was a regular reader at Mass and his younger brother Dylan bravely served at the funeral Mass. Clodagh paid a lovely tribute to Damien in the presentation of the symbols representing his life, and also gave a reflection after communion.

Organisers of the event hope that with sufficient funding Shirley may be able to obtain more support to help Clodagh.

Dylan, the youngest of the three siblings, is in sixth class and is finding life extremely difficult, having lost his brother and grandad in such a short space of time.

Shirley finds it hard to get Dylan to school and is actively seeking counselling for him. The family hopes that Dylan escapes this horrible disease as the illness itself doesn’t present itself until between the ages of 11 to 13-years-old.

The friends and neighbours who are organising the fundraiser say they would appreciate any donation - no matter how big or small - to support this worthy cause. Donations can be made on a Go Fund Me page - gf.me/u/v3va8g