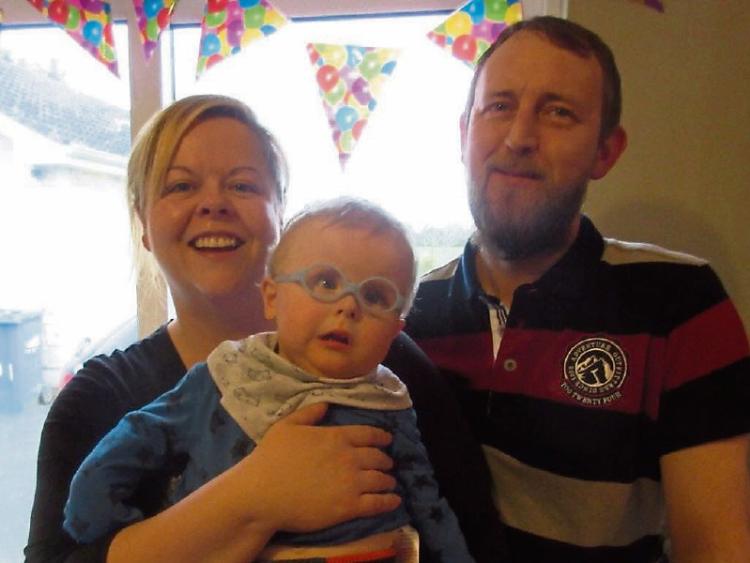 SANTA is coming early to Kilmallock this year to show his support for a young boy who suffers with a condition so rare that doctors had never heard of it.

Four-year-old James Carroll from Bruff cannot talk, walk or sit up unaided. He is fully dependant for every aspect of his daily life, including eating, drinking, changing, moving and playing.

His mother Louise Roche Carroll, who is originally from Kilmallock is aware of only two other children, in America, with the same condition.

James was born with a mutation of the gene CACNA1G causing spinocerebellar ataxia type 42.

On December 8 next between 10am and 6pm, a Christmas fundraiser will take place at the People’s Hall in Kilmallock which will be transformed into a winter wonderland. Children will get the opportunity to meet the man himself, Santa Claus, and have their special moment captured on photo and have an hour of festive fun.

Proceeds from the event will go towards the care of James who can suffer with severe digestive problems, agitation and cramps in his legs which can be very painful.

Louise and her husband William Carroll from Banogue purchased a transport van four months ago to make travelling more comfortable for James.

The aim now is to build an extension to the family home outside Bruff to include a wet room and bedroom for James' needs and also in time extend his kitchen to have space for him to be part of family life.

“At the moment Willie sits into the shower and James sits onto his lap. I can’t wash him by myself. He loves being down on the floor -it’s his only freedom. But he can kick the fireplace or the table and he doesn’t know not to kick it again. He can’t crawl but he can roll,” Louise explained.

Louise and William had no inkling during the pregnancy that there was any issue with their baby’s health.

“James was our rainbow baby. We had lost a baby before James. I was eleven weeks gone. I did have gestational diabetes while pregnant with James so I was seen a lot more than in your average pregnancy and had a lot more scans but everything seemed absolutely perfect. We were delighted.”

James had spent a couple of days after his birth in the intensive care section due to jaundice and difficulty feeding. Other than that, Louise and William didn’t realise that there was anything seriously wrong. James then developed seizures at four weeks old.

“We only got his diagnosis last November,” says Louise of James who turned four in February.

“I contacted St Joseph’s Foundation in Charleville when he was seven months old as I knew things weren’t as they should be. We never had a name for it. I have found two children in America with the same gene mutation but they are nothing like James, they have been up walking around and talking whereas James has never walked or will ever talk. I haven't heard of anyone in Ireland or the rest of Europe suffering with it, and the doctors don’t know of anyone either.”

In the long-term swallowing and breathing difficulties could be a serious problem for James.

Meanwhile, children's tickets for the fundraiser on December 8 are priced at €15 and include a Santa visit, Santa photo, make your own magical reindeer food, colouring station, face painting, and Frosty's snowy corner. There is no charge for adults .

Special time slots are available for children with additional/sensory needs.

Also on the day there will be a monster raffle and Claus Cafe will be serving tea/coffee/treats. There will be more surprises along the way.

Please note pre-booking and payment is essential to secure your visit and there is limited availability.