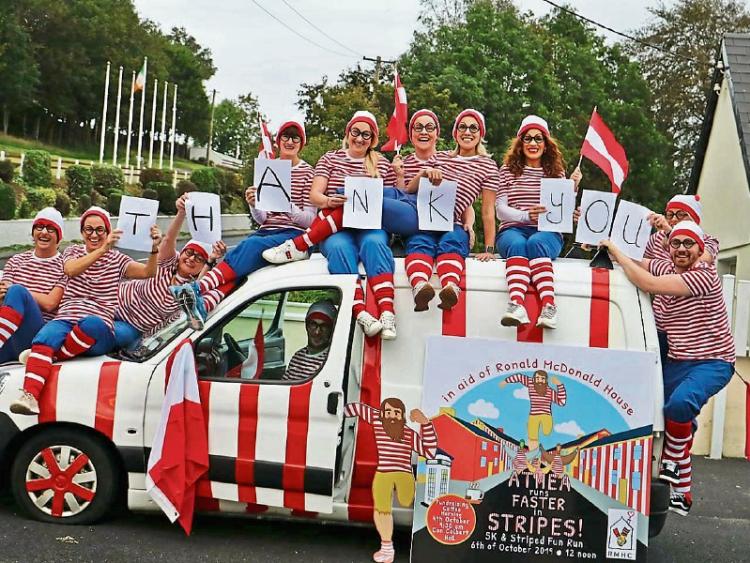 A special 'thank you' to Athea

ATHEA Runs Faster in Stripes has just run even faster. Now, thanks to bursting the €25,000 threshold, one of the new rooms at the Ronald McDonald House in Dublin is to be called The Athea Room.

In fact, the total raised in Athea for the charity was an astonishing €28,038 and involved over 700 men, women and children as well as some wannabe ducks. McDonald House provides accommodation for families of sick children attending the Childrens Hospital in Crumlin.

It was, PRO for the event, Damien Ahern acknowledged, a sum of money way, way above their expectations.

At the very first meeting last August called by Liz Sullivan, a target of between €5,000 and €10,000 was discussed.  “Some of us were reluctant to even dream of hitting the €10,000 mark, but we should have known that Athea and the surrounding parishes, as always, would support us 100%.” Damien said this week when news of the singular honour of naming a room after Athea was confirmed.

But once the events were agreed, the support piled in,  from over 60 groups, organisations and businesses while groups, businesses and inviduals also organised fund-raisers in the build-up to October 6.

A key element in building support for the charity were the testimonials from local families who had used the services of the Ronald McDonald House, which provides accommodation and other supports to families of sick children attending Dublin hospitals.. The Ahern, Hickey, Keily and O’Sullivan Families all willingly provided an insight into the service and pledged their support. These testimonials proved crucial in gaining support and by making the connection to our small but mighty community,” Damien Ahern explained.

The fundraiser also sparked a huge wave of creativity anad fun across the village and parish.  Flags, bunting, teddy bears, ribbon, scarecrows and so on were all used for creative displays, and windows, vans and even houses were given the red-and-white stripe treatment. And it also clocked up big social media interest and even a spot on Today FM.

On the weekend of the Fun Run/Walk itself, help, back-up and support arrived from all quarters and even the sunshine obliged.

By Sunday evening, the organisers were certain that at least €22,000 had been raised with more to come. Behind the scenes, the hope was that the €25,000 threshold for naming rights could be broken.  A final striped day fundraiser  organised by Lizzie Murphy and Jo Flinn at Free Range Kids at the Old Rectory, Croom helped break that barrier along with money from other individual fund-raisers. And broken it was, with over €3,000 to spare, much to the great joy of the organising committee. “This will ensure that Athea and the #Athearunsfasterinstripes weekend will be forever remembered in the Ronald McDonald Facility,” Damien said.

They were also more than happy too with the fact that their total expenses for the weekend came to a meagre €560, thanks to superb sponsorship.

“A massive thank you to everyone who supported our fundraising efforts and for embracing the red and white stripes over the last number of weeks,” Damien said on behalf of the organisers. “ We should all be very grateful to be living in a very generous community who are willing to support a cause and who look after their own. We are but a small village, with a very big heart.”