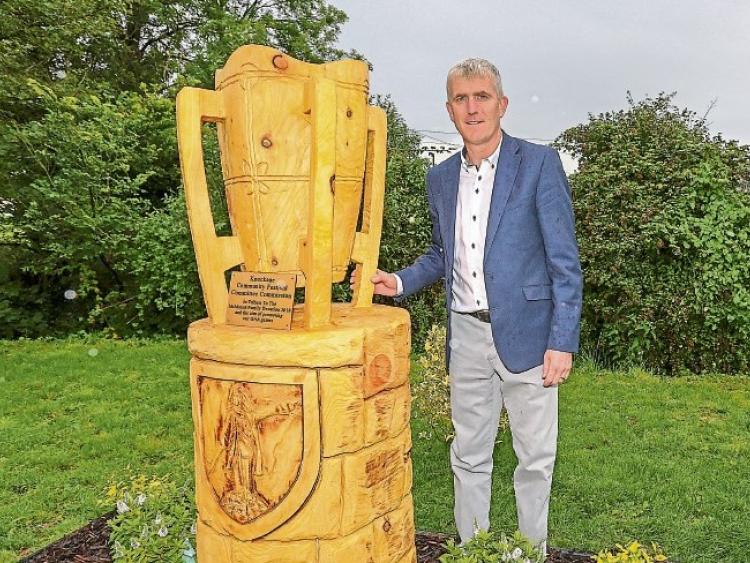 WHO better than the man who led Limerick to All-Ireland glory last year to unveil a giant wood carving of the Liam MacCarthy Cup.

The splendid sculpture was carved by chainsaw sculptor Will Fogarty at the behest of Knockane GAA Club, based in the parish of Pallasgreen. They used the JP McManus donation to every GAA club in the country last year to commission the work of art.

John Kiely did the honours and was full of praise for the GAA club’s novel idea and Will’s handiwork. Diarmuid Grace, secretary, said a seed was planted when they got almost €1,500 from Mr McManus’ generosity. He said the money was an unexpected bonus and Roger Butler, chairman, was insistent on doing something memorable with it.

“In line with the intention of JP's kind donation to us and to all clubs nationwide last year we decided that the best way to promote the sport and to mark the occasion of Limerick's historic All-Ireland victory was to leave a lasting souvenir in our sports grounds.

“It will act both as a reminder of that great achievement and also as something tangible to represent always, the gratefully appreciated financial windfall, which this gift was for our small club,” said Diarmuid.

“To this end we commissioned a piece of art that we feel is iconic of our great association and sport - Limerick’s win – and is also representative of our local community,” he continued.  Diarmuid said John gave a great speech about the community spirit in Knockane.

“He said that we are a small club not unlike his own Galbally and a border club as well so there is great rivalry. The pitch is just bordering County Tipperary. Quite a few of our members are from Tipp so there was good banter. They are hoping to lift the real thing on Sunday,” said Diarmuid.

The sculpture is on the club’s walkway and the ceremony on Friday evening also launched the Knockane Community Festival.  “The bottom part is the Knockane GAA crest. It is Patrick Sarsfield and then Will made the bottom of it  look like old stone. Will is fantastic. It turned out very nice. The plaque reads ‘Knockane Community Festival committee commission in tribute to the JP McManus donation in 2018 and the promotion of GAA’,” said Diarmuid.

Amazingly Will said it only took him two days to turn the piece of spruce into a masterpiece.

“It is about six foot tall. The cup is close to three feet. I don’t think there is a larger Liam MacCarthy in the country. We might have lost it but we still have the biggest one here!” said Will. He did a scale drawing of the cup last August as he was asked to carve a number of them after the win.

“I just had to scale it up. I don’t think anyone will be lifting it over their heads,” he laughed.

The Hospital man said he was worked all over the country but he is proud to get more commissions in Limerick and especially to celebrate a victory that brought so much joy to the county.

“The only disappointment is I carved it two or three days after Kilkenny beat us in the semi-final,” said Will. But this young squad is still maturing and let’s hope the real Liam is back again soon.