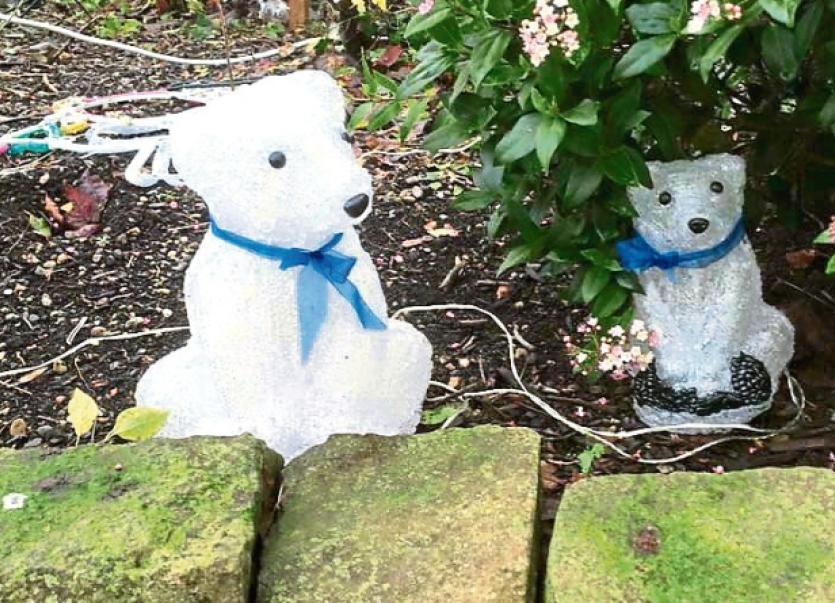 THIEVES stooped to a new low when they stole two “loveable bears” from a Christmas lights display in aid of two local charities.

THIEVES stooped to a new low when they stole two “loveable bears” from a Christmas lights display in aid of two local charities.

The festive features - a mother bear and her baby cub - were stolen from the grounds of the home of Joe Carroll of Coolruss, Bruree.

The Christmas Grinches plucked the two, white, light monuments out from under a bush where they had formed part of a 14-piece Christmas display in that area of the front yard.

The entire festive arrangement features 160 pieces which are powered from 148 plugs.

“As I said to someone last night, if someone really wanted them and if they came and asked me, I would have given them to them - please don’t steal them,” said Joe Carroll this week.

“They were small little bears that they took – a mother bear and a cub bear and they also took the transformer which powered them.”

Joe has been operating the lights display at his home for the past seven years in aid of two local charities - Pieta House and St Joseph’s Foundation in Charleville.

“People are very disappointed by what’s happened,” Joe continued. “They are telling me they hope that we get them back and people are also saying that whoever took them ‘won’t have an ounce of luck!’”

“We have never had anything stolen from the display. It was always my biggest nightmare that I will come home some night and my few feature pieces would be gone.”

The Carroll family home which is located three kilometres from Rourke’s Cross on the main Limerick to Cork road has become a go-to destination for families across Limerick, such is the huge array of lights and features on display over the Christmas period.

“We turn them on every evening at 5pm and keep them on until 10pm,” said Joe.

“The night we had Santa here we had 50 families and on last Sunday night around 40 families called to see it. They pull up outside and we invite them in.”

Many of the features were purchased in America.

“I also have a display case with musical carousels, merry-go-rounds, sleighs and things like that.”

The bears, Joe says, were stolen in the past week.

“The value of them is only around €60 but it’s the idea that someone would steal them,” said Joe.

“They were a feature under the bush. That’s where I had placed them for effect.”

The families who visit the lights display at the Carroll home generally leave a donation of their choice which will benefit the two local charities.

“It is all in aid of Pieta House and St Joseph’s Foundation. They have been my two preferred charities. We have given them about €11,000. We sponsor the cost of running it and everything,” said Joe.