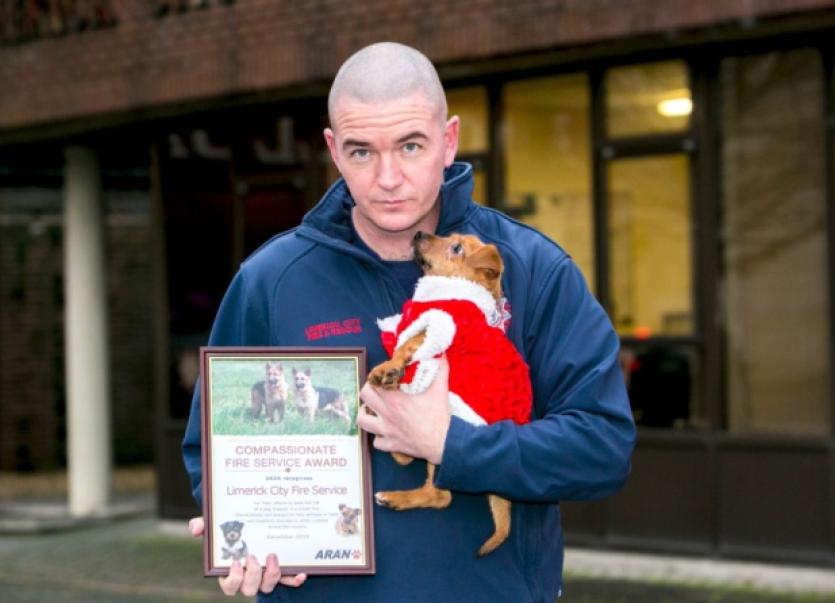 LIMERICK Fire and Rescue Service has been given a special award from the Animal Rights Action Network (Aran) for rescuing a little Jack Russell puppy.

LIMERICK Fire and Rescue Service has been given a special award from the Animal Rights Action Network (Aran) for rescuing a little Jack Russell puppy.

As revealed in the Leader last week, the baby dog, named Buster, escaped with his life from a burning house fire in Prospect last week, and was revived with an oxygen mask by firefighters.

And to recognise the efforts of Limerick’s fire service, Aran awarded the special Compassionate Fire Service Award to staff in Mulgrave Street.

Jackie Fitzgerald, a member of Aran said: “Limerick should be very proud of the heroes in their fire station today. They went above and beyond to save the life of an innocent little puppy. It was an act of pure compassion.”

The officer who retrieved the puppy-dog from the burning house, Steve Cusack, did not wish to comment.

But station officer Pat Kiely said: “It is a great story. It is always good to get a man, woman or child or animal out of a fire. This dog was in a very severe fire, and it is great that is survived, due to the good work of the crew that went in, found her, and brought her out, and gave him oxygen.”

He said the award is great for morale at the station, adding: “We deal with a lot of tragedy, so it is great when this kind of thing happens. Everybody is on a high, and it is a really good story.”

He confirmed he had spoken to the owner of the puppy, and while she did not wish to comment, she is “over the moon” that her puppy was rescued.

Buster appeared to be doing well when the fire officers were presented with the award this Wednesday. Dressed in a red Christmas outfit, the little critter was shivering from the chilly weather, but was otherwise in good shape.

Buster is being looked after by the father of the lady who occupied the house in Byrne Avenue, Prospect for the time being. Aran say they hope rescues like this can be replicated nationwide.