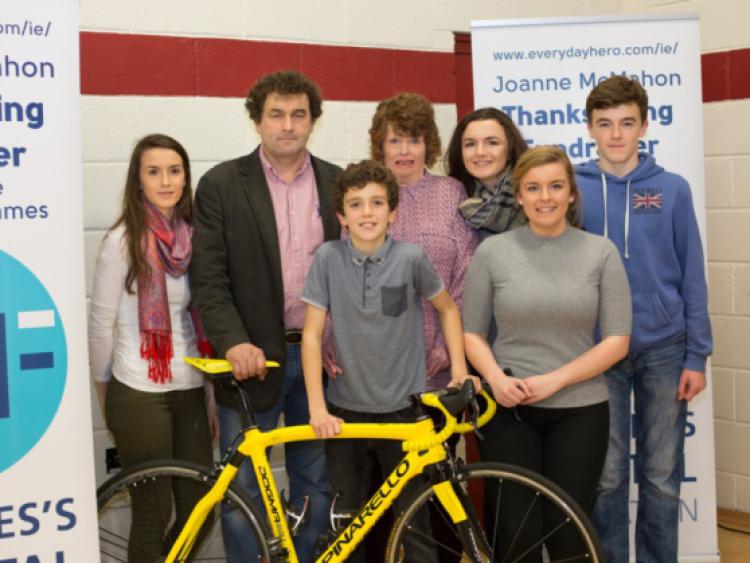 HUNDREDS of people gathered in Castlemahon this week in an extraordinary display of solidarity with an exceptional woman, Joanne McMahon.

HUNDREDS of people gathered in Castlemahon this week in an extraordinary display of solidarity with an exceptional woman, Joanne McMahon.

And when they left, at the end of the evening, they carried with them a heartfelt admiration for the woman who had been so grievously injured but who had so courageously stood before them, smiling, laughing and hugging everybody.

In a simple but eloquent speech, Joanne spelled out her wish, to give back to the burns unit at St James’ Hospital in Dublin. And she appealed for people’s help in doing that.

“I never thought it would be my story,” she told a capacity audience of over 400. “And unfortunately we don’t know whose story it will be tomorrow.”

Joanne, herself a qualified nurse who lives with her husband Mike and their five children in Castlemahon, suffered calamitous burns at a post-Confirmation barbecue in May of last year and had to be air-lifted to Cork before being transferred to the specialist burns unit of St James a day or two later. There she spent 131 days in intensive care in an induced coma.

“I had never heard of the burns unit until I woke up there,” she explained. “I couldn’t praise highly enough the care, kindness, patience and skill I got there while I was a patient.”

It is, she added, a small, self-contained unit with a highly-skilled, multi-disciplinary team, each one of whom was “kinder than the next” and their kindness to her, in her early, weak state was outstanding. “It was like a home away from home. When you are vulnerable it is great to be in an environment like that,” she said.

On her road to recovery, Joanne has had to undergo several reconstructive surgeries and has more to come. She also had to learn to swallow, to walk and to talk again and has to have physiotherapy several times a week. In addition, Joanne returns to St James’ one day a week.

“We always had the idea to try and repay them in some way,” Joanne explained, before going on to spell out that the burns unit has its own vision to refurbish the unit, to acquire more equipment and to develop its own therapy rooms.

The fundraising walk, run and cycle on April 17, is her way of trying to help them achieve that vision. “Unfortunately we haven’t won the Lotto so I am asking you all to help instead,” she said.

The fundraiser, MC Liam Woulfe pointed out, will take place exactly 131 days after the launch. “We want to encourage people to get involved,” he said. Their hope, he added, was that people would sign up for the walk, run or cycle but also, that people who couldn’t do that would organise their own fund-raiser at school, at work or within their local club or community.

In addition to a 5k and 10k walk and run, Michael Field explained there would be two separate cycling routes: a 35/40k route and a 100/110k route. “We have been on to Cycling Ireland and it is fully sanctioned, a fully insured event,” he said adding that many local cycling clubs had been contacted. A separate registration weekend will take place in late January or early February.

Afterwards, as hundreds queued to pledge their help and support, Joanne told the Limerick Leader she was humbled by the extraordinary turn-out. “I can’t believe the turn-out,” she said.

But she added: “It is only looking back I realise how far I have come.”

She had received tremendous support while in hospital, she said and her family, friends and neighbours had been amazing. And she praised her own community of Castlemahon in particular. “It is a fantastic community,” she said. “People are so good. You don’t realise it until you are in need.”

The fundraiser will take place in and around Castlemahon and will conclude with a thanksgiving Mass in the local church.