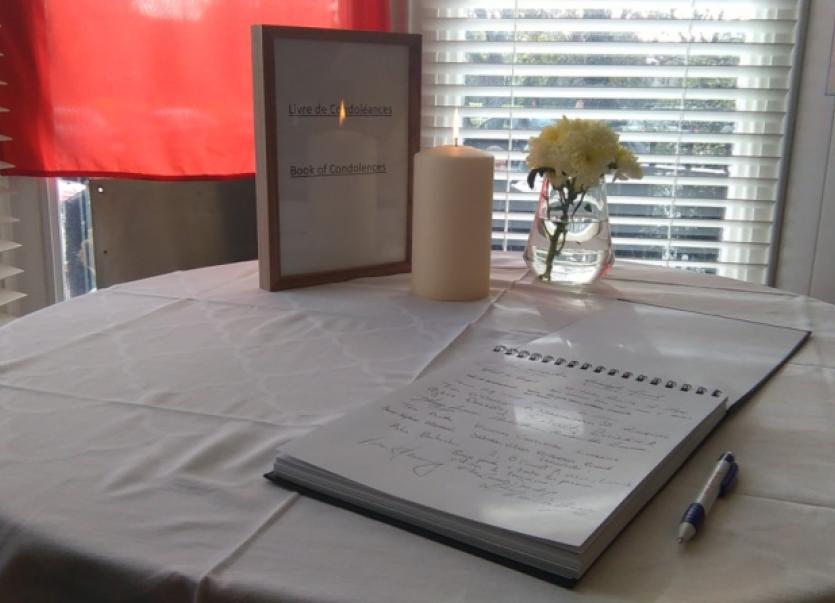 THERE was no rendition of La Marseillaise, which has been sung in defiance across France in the wake of the latest terrorist attacks in Paris, which have killed at least 129 people.

THERE was no rendition of La Marseillaise, which has been sung in defiance across France in the wake of the latest terrorist attacks in Paris, which have killed at least 129 people.

Instead, members of Limerick’s proud French community stood solemnly in the rain outside the Alliance Francaise de Limerick this Monday morning, and observed a minute’s silence in memory of those who have died - and to pray for France’s future in a time of increasing uncertainty.

Behind them, flowers had been placed outside its doors, the French flag hung in its window, and a candle flickered inside, beside the book of condolences.

“My thoughts are for the families affected who have lost loved ones, for the people of Paris who have once again [been] subjected to the evil forces. May they have the will and the courage to face adversity,” wrote Marie Hackett, the vice consul honoraire de France, who lives in Limerick.

Speaking to the Limerick Leader, Ms Hackett said while the high number of casualties is in itself deeply shocking, the attack on French way of life and its ideals of ‘Liberte, egalite and fraternite’ have also wounded the nation at large.

“We are still in shock and extremely saddened by what happened. Our thoughts are with the families who have lost loved ones and the Parisian people. At the moment in Paris there is a real fear, and I can understand that. If this happened on our doorstep it would be the same.

“There is great uncertainty about the future, and that is the worry, because fighting is necessary as these evil people are attacking our way of life, our way of thinking, and the basis of our culture - based on freedom, equality, and fraternity, and we are very proud of that. So, we are going to stand united and fight it.

“But fighting it is difficult, because you are not fighting a country. You are fighting an ideology, and the enemy within. I also feel extremely sorry for the Muslim population in France. Many of my friends are Muslims, and they are extremely respectful people.”

She said on this occasion the attacks are different from the Charlie Hebdo massacre in Paris last January, which were “more political” and an attack on freedom of speech.

“This time the targets are people out on a Friday night, and not in a well-off restaurant, not a bourgeois area, just ordinary young people sharing a bottle of wine in a cafe or listening to music.

“The extremists don’t agree with our way of life. They call us depraved. Why are we depraved? Because we have the right to education, we can read any books we want, listen to music, believe in a God or not, laugh and flirt and even have sex outside marriage,” she said.

She added that the French community in Limerick are very grateful for the support of the Irish people and “are very lucky to be living in Ireland”.

While those who attended were predominantly French, several Irish people also visited to write messages of support, and express their sympathies personally with their French neighbours.

Anissa Bennaili, who is from Lorraine in northern France and living in Limerick, said what happened was very shocking, but the fear now is that it may happen again.

“Even though we’ve read the newspapers, and seen the images on TV, it’s still very hard to grasp. The important thing is for the nation not to be divided, and to stay together, especially when general elections are coming soon,” she told the Leader.

“Things will change, but I hope just for a while, and not forever.”

Anne Sophie Wasmer, from Toulouse, said: “It’s hard to sink in what has happened and understand what the next step will be. It’s extremely sad for those who have had family members touched by this. I can’t imagine how they feel. Everybody knows someone who knows someone who lives there.”

Kate Fleming, president of the Alliance Française de Limerick, said on behalf of the Alliance she would like to express its sincere heartfelt sympathy to the families and friends of the victims of Friday’s brutal attacks.

The book of condolences will remain open at their office at 7 Pery Square and can be signed on Monday up to 2pm, and from 5-7pm, and again on Tuesday from 9.30am to 2pm.

She said following consultation with the French Embassy and as a mark of their solidarity, they have decided to run our programme of events as normal.

The Beaujolais Nouveau Soirée will go ahead this Thursday from 8pm as planned.

A minute’s silence was also observed at Limerick City and County Council, the University of Limerick and Mary Immaculate College, where the French flag flew at half mast as a mark of respect.