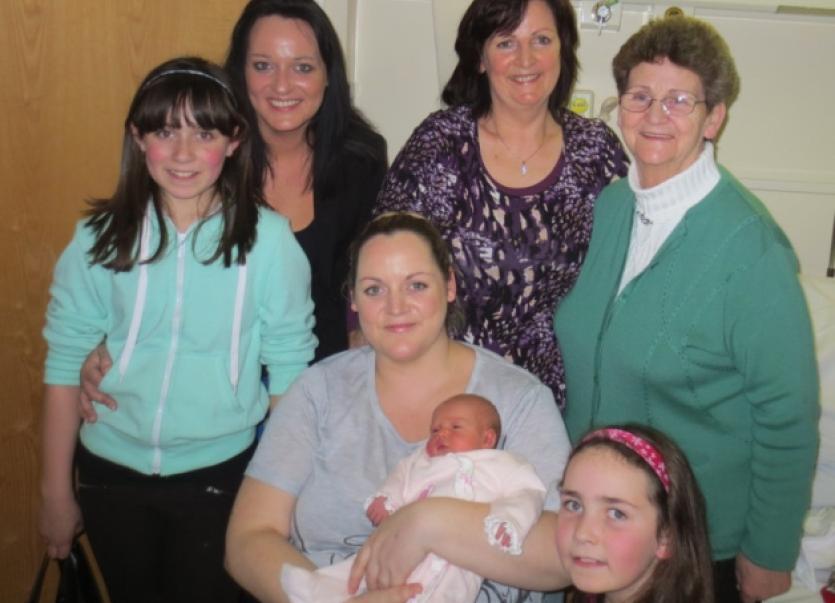 THE LAST of the estimated 78,000 babies delivered in Mount Carmel Hospital was born to a proud Limerick mum.

THE LAST of the estimated 78,000 babies delivered in Mount Carmel Hospital was born to a proud Limerick mum.

Martina Ryan, originally from Gilmartin Park, Murroe, gave birth to Leona Rosemarie Lambe last Friday. The story received massive national coverage but there was hardly a word that Martina was from County Limerick.

And not only is she from County Limerick but her mum, Bridie Ryan, says she is a former Mary from Murroe.

Leona was delivered by caesarean section last Friday, weighing in at a very healthy 6lb 5oz. First time parents, Martina and Thomas Lambe were bemused by all the press attention which comes from being the last child born in the hospital.

Martina told national press that she felt extremely sad for the 320 staff in the south Dublin hospital, who were now to lose their jobs after it went into liquidation.

“You’d never know by them that they were going through this absolutely insecure time in their lives. I’m lost for words about how overwhelming and hospitable they have been. You feel like you’ve known them for years,” she said.

Martina and Thomas took Leona home to their County Kildare house on Tuesday. It brought to a close maternity care in the private hospital opened in 1949 by the Little Company of Mary Sisters.

Surely only the Duke and Duchess of Cambridge, William and Kate’s son George had as many camera flashes going off but little Leona took it all her in stride. And she is certainly photogenic.

“She is beautiful, absolutely gorgeous,” beamed grandmother, Bridie Ryan, who has been travelling up and down to Dublin to see her third grandchild.

The photograph, right, is a special one as it features four generations of the Ryan family –great grandmother Mary Moore, Boher; Bridie Ryan; Martina’s twin, Catriona; her two girls, Emily and Hollie Coleman; Martina and of course, Leona.

Bridie says she is looking forward to Martina bringing Leona down to Limerick for the first time at the end of the month for a Confirmation.

Despite all the commotion that was going on, Bridie said the care was second to none. The caesarean was brought forward to facilitate the family before operations stopped at the maternity unit.

“It was absolutely first class and so professional to the very, very last. On Friday when we were there Martina was out of surgery and there were journalists and people clamouring to get in and get photos of the baby.

“I don’t think we realised the significance of this little baby but the nurse was adamant, ‘No-one was getting near the mother or the baby’. She said Martina was her main priority.

“They were just so professional. We spoke with the consultant on Sunday when she stuck her head in the door for a chat,” said Bridie, whose husband Pa was also in attendance.

As well as twins Martina and Catriona, the couple have three boys - David, Damien and Adrian.

Adrian, who is going to be the godfather, is currently working in South Korea so has been able to see his godchild on all the websites from the other side of the globe.

Bridie says the staff were devastated.

While it is hard for them to comprehend it when they are not from Dublin, she says they just thought “if it was our local hospital that’s how we would be feeling about it”.

“You can see the emotion on the people coming in and out, it is just horrific,” said Bridie.

Liquidators were appointed to the hospital by the High Court on January 24. It was bought by developer Gerry Conlan in 2006 for €50 million.

Mr Conlan’s financial difficulties brought loans associated with Mount Carmel into the remit of the National Asset Management Agency in 2010, which endeavoured to support the institution until confidence returned to the property and private healthcare markets.

In January last year NAMA appointed Goodbody Stockbrokers to sell Mount Carmel and it was put on the market in April. Despite a reasonable level of interest, however, no buyer was secured.

The hospital is expected to close this week.

And when Leona grows up she will learn that she made history when she entered the world and became the last baby born there, to her Limerick mum.