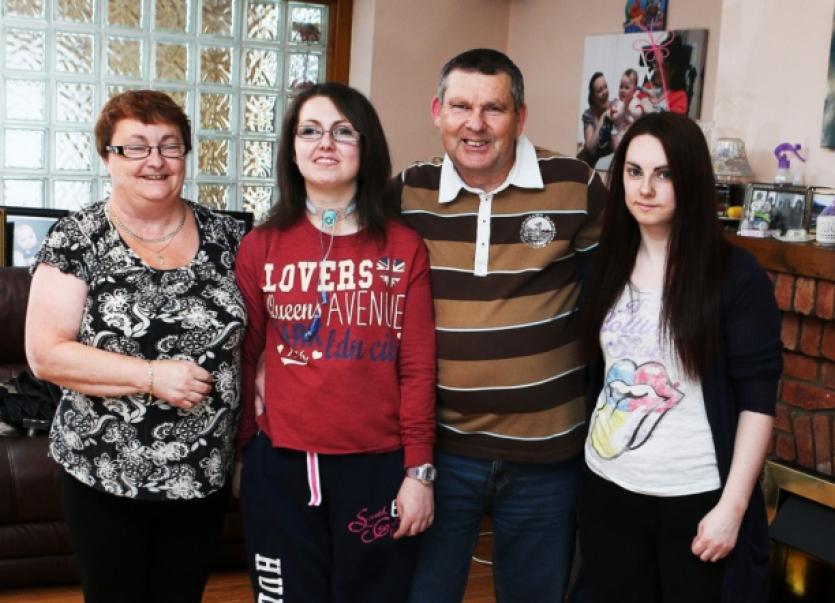 LIMERICK city woman Patricia Ingle, who contracted a debilitating brain infection while caring for sick pets almost five years ago, has revealed she is in the process of writing a book about her experiences and plans to undertake further intensive rehabilitation later this year.

LIMERICK city woman Patricia Ingle, who contracted a debilitating brain infection while caring for sick pets almost five years ago, has revealed she is in the process of writing a book about her experiences and plans to undertake further intensive rehabilitation later this year.

The 24-year-old, who is originally from Ballincurra Weston, contracted a rare disease while working in a pet shop it the city in 2008.

As a result, she was left paralysed, brain damaged, confined to a wheelchair and could only breathe with the aid of a ventilator.

After spending 1,069 days at the then Mid Western Regional Hospital, Ms Ingle was discharged last November. and now lives with her family in Murroe.

“Every day for us as a family to have Tricia with us is a wonderful day. This is where we want Tricia - with her family, with as much independence as she can get. To get her home from hospital was the main thing for us,” said her dad, Pat Ingle, at the time.

Patricia, who two years ago settled a High Court action against both the Health Service Executive and O’Keeffes of Kilkenny Limited (the parent company of Petmania, where she worked), returned to the court last week where she received a further payment.

She had taken the action against the pet shop and had also sued the HSE over its failure to diagnose her condition in time.

Before the case was settled, the High Court was told that on August 12, 2008, Patricia suffered violent headaches and vomiting, attended a doctor and was sent to Mid Western Regional Hospital where she was treated and sent home to rest.

Less than a month later, she was technically voiceless and had suffered irreversible brain damage, blurred vision and could not move, along with difficulty in swallowing. It was claimed she suffered her injuries after contracting chlamydia psittacosis – an airborne infection which can be transferred from birds to humans – while working at the Petmania store in 2008.

It was alleged Patricia contracted the disease during July or August 2008 when a Cockatiel parrot was purchased by the store for €20. It was claimed she received no training in health and safety matters when working with animals at the store.

On August 12, 2008, her lawyers settled the case, which saw her receive an up-front payment of €3m, one of the largest ever reached for a structured payment scheme.

Ms Ingle was awarded a further payout last week after the High Court was told that legislation has not yet been enacted to provide for periodic payments in catastrophic injury cases such as as her case.

Her case will be reviewed again in two years time and it is understood if legislation is not enacted by then, lawyers representing Patricia will seek the award of a lump sum in the case.

Both prior to and since her release from hospital, Patricia Ingle has shown remarkable courage and detirmination in fighting her condition.

Last summer she underwent intensive rehabilitation at the Oxford Centre for Rehabilitation and she continues to receive regular physiotherapy and other treatments in Limerick.

While the progress she has made may have been steady rather than spectacular, her parents Pat and Annette feel it incredible . After all, doctors told the Ingle family they were amazed Patricia managed to survive her illness .

“She always loves doing things to improve herself, like going to physio, even though she would be tired afterwards. She calls it a good tiredness,” Pat told the Limerick Leader last year.

“Of course she’d love to be able to do more, but she’s always upbeat and positive. There isn’t a day that goes by when she surprises us by doing something she hasn’t done before. That keeps us going as well,” he added.

Speaking outside the High Court last week, Patrica said she is detirmed to keep battling her illness.

“Almost five years after my illness, I have only my own determination, my amazing family and my lawyers to thank for my survival, rehabilitation and progress, She said following last week’s High Court proceedings.

“It is the same people who have always believed in me and my ability to progress. I would never have reached the heights I have only for them,” she added.

Patricia had a special word of thanks for her solicitor, Susie Elliott of Ernest J Cantillon Solicitors, Cork.

“Thank you for always ensuring no stone was ever unturned in getting the very best for me, every step of the way. I’m now looking forward to the next two year chapter and further progress,” she said.

“I am delighted for Patricia that the legal process has secured her funds for the best of care and neuro-rehabilitation, she said adding that she has no doubt that the money will be put to good use by Patricia to secure further progress and recovery as she continues to work hard for the best possible quality of life.

“After all she has been through, I am continuously struck by her incredible determination andcourage. She is an inspiration to us all” she said adding that Patricia has obliterated all expectations,.

“By putting her head down and grinding through endless months of intensive neuro-rehabilitation, Patricia has, through her own determination, emerged from her ‘locked in’ state,” added Ms Elliott..

Patricia is now able to walk (with supports) and can talk with the benefit of a device on her trachy.

She can also breathe independently of her respirator for up to five hours a day.

Sinc ebeing released from hospital last year, The 24-year-old has attended and completed a university course and she manages her nursing care regime personally.

She lives at home with her family in Murroe and is enjoying the company of her family and pets.

She is also in constant contact with her friends online, through her mobile electronic devices and social media sites.

In addition to writing a book about her experiences since 2008, Patricia is also in the process of planning the design and construction of her new home.

She is also making plans to travel to London in September where she will undergo further rehabiltation.

“Patricia is an uplifting inspiration for everyone she meets and a perfect example of how personal determination and the backing of an amazing family can transform even the most hopeless of outlooks into the brightest of futures,” said Ms Elliott.