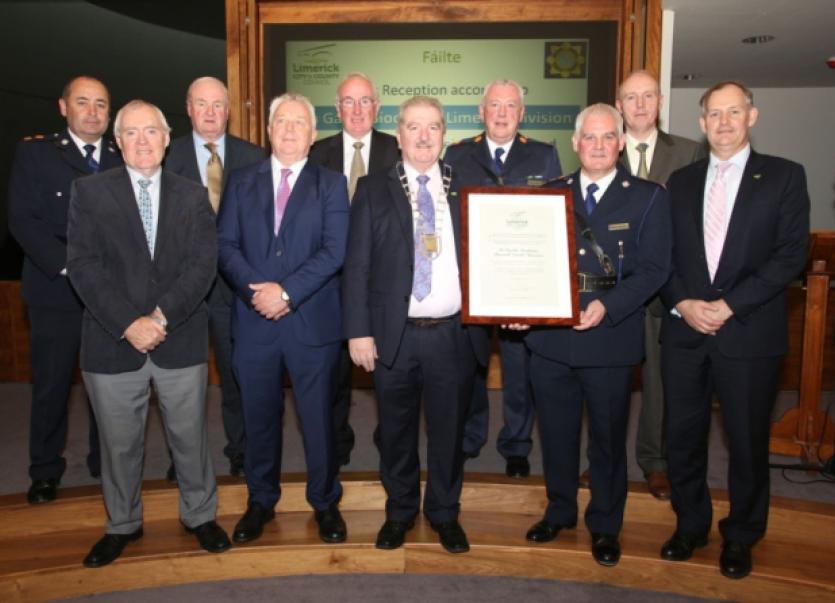 ONE of the country’s most senior garda officers has praised the calibre of past and present gardai in the Limerick division.

ONE of the country’s most senior garda officers has praised the calibre of past and present gardai in the Limerick division.

Assistant Commissioner John O’Mahoney made his comments during a civic reception at County Hall to recognise the “dedicated and unselfish contribution” of local gardai in “successfully combating criminality and supporting communities in Limerick”.

In his address, Asst Commissioner O’Mahoney said there is a strong history of policing in Limerick and he said members of the detective branch deserve particular praise for their work in tackling serious crime.

“There have been very, very sad days in Limerick. The detective branch has had to stand up to the plate and they stood up to the plate and that continues with the amount of detections. I don’t think there has been any place in Ireland that has had such a good detection and conviction rate against serious criminals as Limerick and I have no doubt that will continue into the future,” he said.

The Mayor of Limerick City and County, Cllr Kevin Sheahan, said he was delighted that the local authority had agreed to host the civic reception.

He said the work of An Garda Siochana in Limerick in recent years has seen negative headlines about Limerick largely disappear.

“The Limerick we know and love today is flourishing thanks to the commitment and professionalism of those great men and women. There is no greater act than one carried out for the betterment of the community in which you live and work. The foundations on which we have built our city of culture, an internationally recognised investment location and a safe environment for our children to grow up in is due, in no small part, to the work of An Garda Siochana.

Conn Murray, the Chief Executive of Limerick City and County Council, said events such as the visit of the Giant Granny last September would not have happened without the support of the gardai.

“I think one of the transformational approaches in terms of community policing has enabled us to declare Limerick a safe and happy location for people to live, to work and to visit,” he said.

Chief Superintendent David Sheahan - the current head of the Limerick garda division - told those present that since the beginning of the century there have been more than 60 murders in Limerick - the vast majority of which have been solved.

He said in 2007 - at the height of the so called feud - there were 102 incidents of firearms being discharged which accounted for a quarter of all such incidents in the country.

Pointing out that incidents of serious criminality have fallen in recent years, he said this would not have been possible without the partnership and commitment of all the stakeholders in policing.

“The success which An Garda Siochana enjoyed in taking on serious crime in Limerick is rightly, in my view, seen as a reflection of the dedication, the commitment and the professionalism of the past and present divisional force,” he said adding that the “investigative expertise, the high level of knowledge, the skills and the abilities of members attached to this division are recognised throughout An Garda Siochana”.

In addition, to Cllr Sheahan, each of the party leaders spoke during the reception as did the chairman of the Joint Policing Committee, Cllr Sean Lynch.