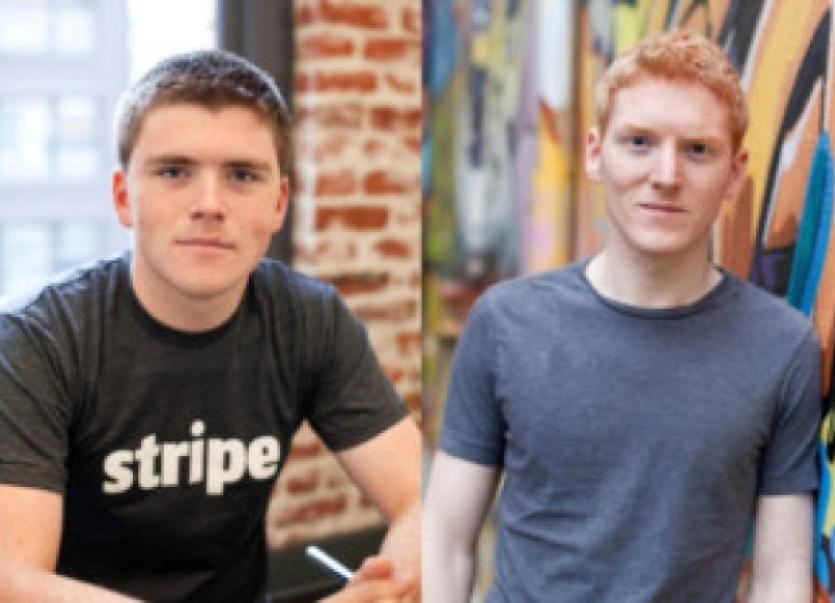 AS Limerick gains increasing recognition in the global technological market, the remarkable achievements of three local entrepreneurs have been recognised through the presentation of person of the month awards.

AS Limerick gains increasing recognition in the global technological market, the remarkable achievements of three local entrepreneurs have been recognised through the presentation of person of the month awards.

Brothers Patrick and John Collison from Castletroy have been honoured for the extraordinary success they have achieved with their company Stripe - an online payments company which is valued at around $1.75 billion.

The brothers - both past pupils of Castletroy College - employ more than 80 people at their base in San Francisco.

Deputy principal of Castletroy College, Joan McGarry, described the brothers as “absolute role models” for students “because they have proven that by hard work, imagination and a total passion for the area they have chosen, that you can make good.”

Ms McGarry - who thought Patrick, now 25, when he was a first-year student of the secondary school - said both he and John, 23, were complete all-rounders in school.

“They had a really lovely way with their peer group, with the staff, with everybody who came in contact with them. Gentlemen is how I would describe them,” she said. “They had a great thirst for knowledge and were interested in all disciplines. They could talk about anything, be it in the humanities, sciences, technologies, sports or politics.”

While they were undoubtedly “superb scholars” the brothers showed a keen interest in all aspects of school life. “They had both a good sense of fun and were both highly involved in extracurricular activities,” said Ms McGarry.

Speaking earlier this year, Patrick, chief executive of Stripe, who won the Young Scientist and Technology Exhibition in 2005, then aged just 16, said that the duo have “no interest in selling the company” after the latest round of investment, which made headline news around the world.

“John and I are very lucky to work with the people we do on building something for the long-term, and we wouldn’t like to change that,” he said.

Also honoured with the Limerick Person of the Month award was John Hartnett, founder and president of the Irish Technology Leadership Group.

A native of Corbally, Mr Hartnett - who is a senior technology executive and investor based in Silicon Valley, California – hailed the Limerick event as “the best ever” in the forum’s seven year history. “What was special about this is it really was a region getting behind the event and working with us,” said Mr Hartnett. “The primary focus was to create a strong linkage between the US and Ireland especially in the technology sector in Silicon Valley. The focus is on technology investment and leadership.” In excess of 1,000 delegates attended the ITLG day conference at the University of Limerick on January 28 which was officially opened by President Michael D Higgins. Over 2,000 people participated in five events which took place over two days.

One of Mr Hartnett’s personal highlights was the ITLG Young Innovators 2014 event held in Shannon Airport where 700 secondary school students from across the country participated.

“The excitement and the energy were just phenomenal,” he recalled of the event.

“All the young people did phenomenally well - I was just so impressed with their confidence. Not alone did they have to present but they had to take questions from Dragons’ Den investors which can be intimidating in itself but they did spectacularly well.”

The Limerick man said he was “delighted” that a Limerick team - from Castletroy College - won the overall award. “I was careful not to involve myself in the judging because, obviously, I would be biased with my Limerick background so I was delighted the Dragons’ Den people made the decision. It really showed the strength of Limerick and what Limerick has to offer.

“This was all about helping young people think about becoming entrepreneurs, creating ideas and turning those ideas into a company and presenting to investors. This was a huge win for not alone Limerick but Ireland.”

Mr Hartnett acknowledged the partnership of Dell and LIT who had mentors on the ground working with the young people on the day, “and then obviously Shannon Airport who did spectacularly well coordinating this while at the same time running an airport with planes coming in from all over the world”.

Mr Hartnett lives in Los Gatos in Silicon Valley with his wife Helen - who is a native of Clareview in Limerick - and his children Sean, 12, Rachel, 10, and Ella, 8. His daughter Jennifer, from his first marriage, is a native of Limerick and is now an actress and stand-up comic in LA.

An avid Munster supporter, Mr Hartnett plans to make the journey home for the quarter-final against Toulouse in Thomond Park next month.

The Limerick Person of the Month award is sponsored by the Limerick Leader, media agency Southern, and the Clarion Hotel.