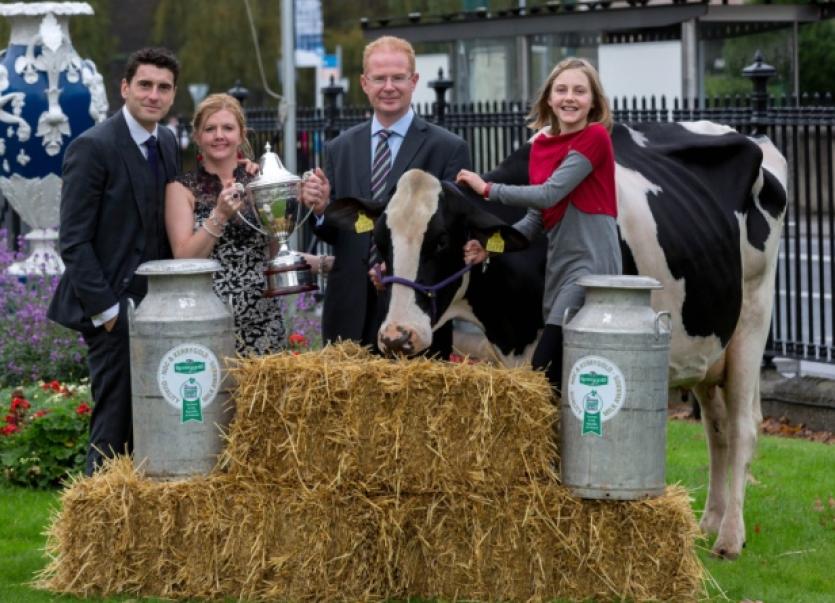 LIMERICK is fast becoming the Kilkenny of the NDC and Kerrygold Quality Milk Awards - called the Liam MacCarthy Cup of farming.

LIMERICK is fast becoming the Kilkenny of the NDC and Kerrygold Quality Milk Awards - called the Liam MacCarthy Cup of farming.

Edward and Olivia Fitzgerald, from Tobernea, Effin were declared the winners of the best dairy farm competition on Monday. Farming only a few miles away, Denis and Rioghna O’Gorman received a highly commended prize for best somatic cell count of 62.

The competition sets out to highlight and reward excellence in Irish dairy farming and Limerick has a proud tradition. Danny and Patrick Cremin, Ballintubber, Newcastle West were runners up last year. While in 2011 Michael and Thomas Enright, Ballynorth, Askeaton won the competition.

Edward and Olivia Fitzgerald, who supply milk to Kerry Agribusiness, were presented with the perpetual cup and €5,000 at an awards ceremony in the RDS.

Speaking this Wednesday, Edward said that they were shocked when they heard the announcement.

“It still hasn’t sunk in. We were surprised and delighted, it is still surreal,” he said, modestly.

While his cows don’t know they are being milked by the winner of the national competition, Edwards jokes that it is “much easier milking them”.

Edward says it is a joint award between himself, his wife Olivia and his father Michael, who took over the family farm when he was just 14.

After he handed over the farm to Edward five years ago, Michael now aged 66, is still heavily involved

Commenting on this year’s finalists on behalf of the judging panel, Dr David Gleeson, Teagasc, said: “Good results don’t happen by accident and in some cases farmers were achieving top class milk for the last 10 years.

“Six of the group had an average protein percentage over 3.5 - very impressive, especially for spring producers.”

Congratulations to the Fitzgeralds on another proud day for farming in Limerick.