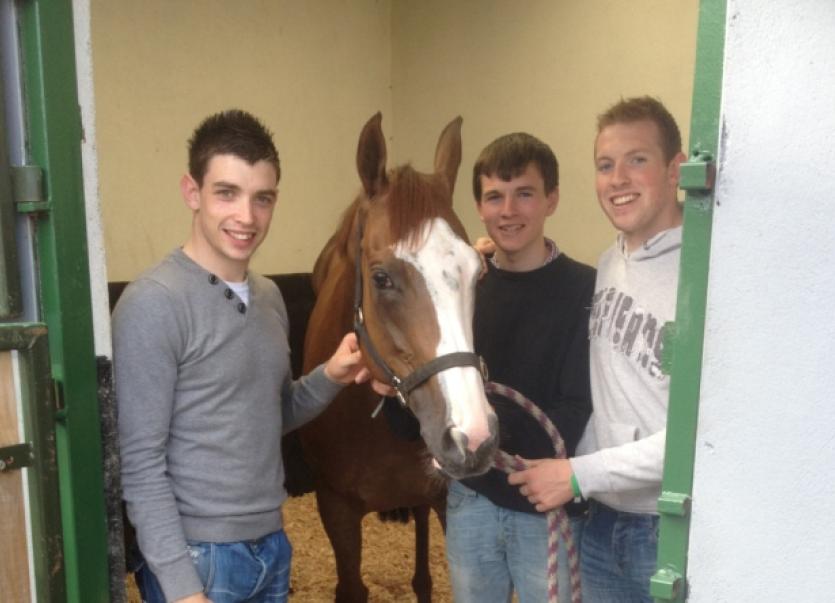 WITH one major hurdle to clear before an All-Ireland appearance in Croke Park, three Limerick hurlers have started their week in the winners’ enclosure!

WITH one major hurdle to clear before an All-Ireland appearance in Croke Park, three Limerick hurlers have started their week in the winners’ enclosure!

Caherdavin’s Shane Dowling, Gavin O’Mahony from Kilmallock and Seanie Tobin of Murroe-Boher are part of the Liiimerick Syndicate which owns Sassaway – a white-faced chestnut coloured mare who is leaving her own hoofprints on the summer of 2013.

Having ran 34 times without success, Sassaway was purchased at the turn of the year and since May alone she has landed the Limerick boys in the winners’ enclosure on four separate occasions.

On Sunday, the Eamonn O’Connell-trained six-year-old took the spoils in the Stallion Farms EBF Fillies Handicap at the Curragh under Fergal Lynch. Sent off at 8/1, she was prominent throughout, hitting the front over a furlong from home, and staying on well from there to score by a length and three parts.

“Seanie and Shane were above with us. It’s a great old hobby for them and something to get their minds off the hurling,” said Eamonn. “They are enjoying it and they are extremely lucky to have her.”

For Eamonn, who is originally from Caherdavin and is now based at Longstone, Cullen, County Tipperary, last Sunday was his first time having a runner, not to mind a winner, at the prestigious County Kildare track.

The hurling trio’s involvement came about through Shane Dowling who is a good friend of Eamonn’s son, Eoin.

“I am originally from Caherdavin so I would have known Shane. He is always hanging around with my own young fella, Eoin,” Eamonn explained.

“It was actually Eoin who bought her. She came here on Christmas Eve. Shane said he always wanted an interest in a horse and he got a few of the hurlers involved - Gavin O’Mahony and Seanie Tobin,” he explained.

The hurlers have a quarter share in the horse along with John Woulfe from Kilmallock and Michael Peril from Fedamore. Eoin has a half share while Limerick city-based Cormac Hyland and Sean Kelly of Parteen own another quarter.

“Shane would be out here in my place a good bit,” said Eamonn. “The other lads would call out or give a ring to see how she’s getting on,” he added.

“Things are working out with her,” said Eamonn. “ You could buy 100 of them and it could be no good. She had ran 34 times and never won.”

So what does he put her winning streak down to?

“A bit of luck I suppose,” smiled Eamonn who has been training horses full-time since 2008. He worked for Aer Lingus for 17 years “but I always kept horses”.

“She is enjoying it here. We have a swimming pool for horses and she loves the swimming,” he continued about Sassaway.

Eamonn - who also trained the famous Powerstation who competed in Cheltenham - also paid tribute to the two pilots who have steered Sassaway to victory - Declan McDonagh who was on board in Down Royal on June 22 and Fergal Lynch who held the reins for her three other victories. “That’s Fergal’s first winner since he came back from breaking his collarbone,” said Eamonn of last Sunday’s win at the Curragh. “It’s great to get him back.”

Proud owner Seanie Tobin expressed his delight at the win on his Twitter account on Sunday afternoon.

“Sassaway you beauty,” he tweeted, “a Curragh winner, great ride by @FLynchJockey and trained by the maestro Eamon O’Connell!”