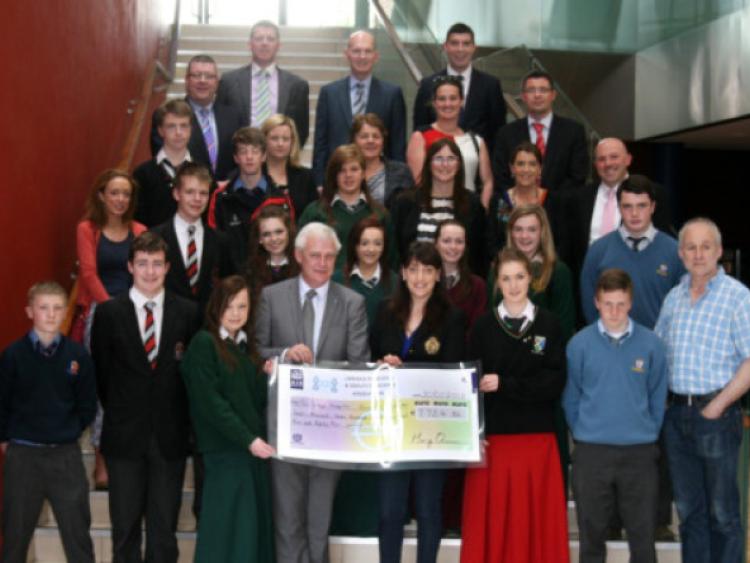 LESS than three weeks after he buried his only son - the late Donal Walsh – Fionnbar Walsh travelled to Limerick to thank a group of local secondary school students for continuing his son’s legacy.

LESS than three weeks after he buried his only son - the late Donal Walsh – Fionnbar Walsh travelled to Limerick to thank a group of local secondary school students for continuing his son’s legacy.

Sixteen-year-old Donal Walsh passed away on May 12 after fighting a four year battle with cancer.

In the months leading up to his death, Donal’s message about suicide and the conditions at Our Lady’s Children’s Hospital, Crumlin, struck a chord with the entire nation.

The colours day took place just two days before Donal passed away. Through their actions, the Limerick students raised in excess of €7,700 for the very worthy cause.

The presentation of the cheque on behalf of the schools through the Limerick Association of Principals and Deputy Principals (LAPDP) to Our Lady’s Children’s Hospital, Crumlin, took place at the Absolute Hotel in Limerick.

In attendance were principals and students from each of the participating schools, along with Donal’s father, Fionnbar from Knocklong, and uncle, Tom from Bruff.

Addressing the group of students, Fionnbar recalled how, two weeks before Donal’s death, on a Wednesday, his boy overcame his last big obstacle.

The teenager, he said, looked up from his wheelchair at the stairs of his Blennerville home outside Tralee. There were 15 steps before him. It took him half an hour to reach the top.

“When he was looking at that from his wheelchair before he went up, there I saw a man who was looking at God’s mountain, and his mountain was only 15 steps,” said Fionnbar

“He worked at it and he got up there. He stayed going up and down the chairlift until the Friday night before he died. He died on Sunday. We only had the memory of Donal two days in bed.”

Donal had been told by doctors that he wouldn’t see Christmas.

“He was told he would be damn lucky if he made the New Year, there was no way he was making Easter, yet he woke up to his mother on May 1 and said; ‘Hey Mom, I made summer’,” said Fionnbar, “and he kept on going until May 12.”

Donal’s story of hope and survival came to the attention of the wider public when he was interviewed on The Saturday Night Show with Brendan O’Connor. While during the interview the teenager displayed a mental strength far beyond his 16-years, behind the scenes, Fionnbar explained, Donal was struggling.

The family went into the RTE studio an hour early so Donal could practice walking onto the set.

“We practiced so he wouldn’t trip on the step and if you look at the interview again, he was out of breath by the time he sat down,” said Fionnbar.

“That’s because the cancer had eaten so bad into his lungs.”

The Knocklong native went on to thank the schools, and in particular the students, who have kept Donal’s spirit alive through their fundraising efforts.

“For what you have done for Crumlin, all I can say is thank you, thank you from the bottom of our hearts,” he said.

The event co-ordinator, deputy principal at St Munchin’s College, Brian O’Donoghue, described Donal as “a giant of a young man”.

“The students in all our schools should be very proud of what they have done,” he said.

The chairperson of the Limerick Association of Principals and Deputy Principals, Donncha Ó Treasaigh, principal of Gaelcholáiste Luimnigh, said the efforts of the students and staff “is another example of the close working relationship that exists between the Limerick schools.

“Inspiration and hero are often over used terms but in Donal’s case they are absolutely appropriate terms to use.”

Student Emma Morris from Scoil Carmel said that Donal was a true inspiration, particularly to people of her age.

“When you think of anyone getting cancer at this age you would think they would be depressed but he had such a positive outlook on everything,” said the 16-year-old.

Donal’s uncle Tom paid tribute to everyone who has supported the family in recent times and thanked those who are continuing the good work of his nephew.

“The support – emotional, physical and financial - towards Donal has been great over the last couple of months. It is not just local, it’s nationwide and it’s gone global as well. Donal reached everybody,” he  said.