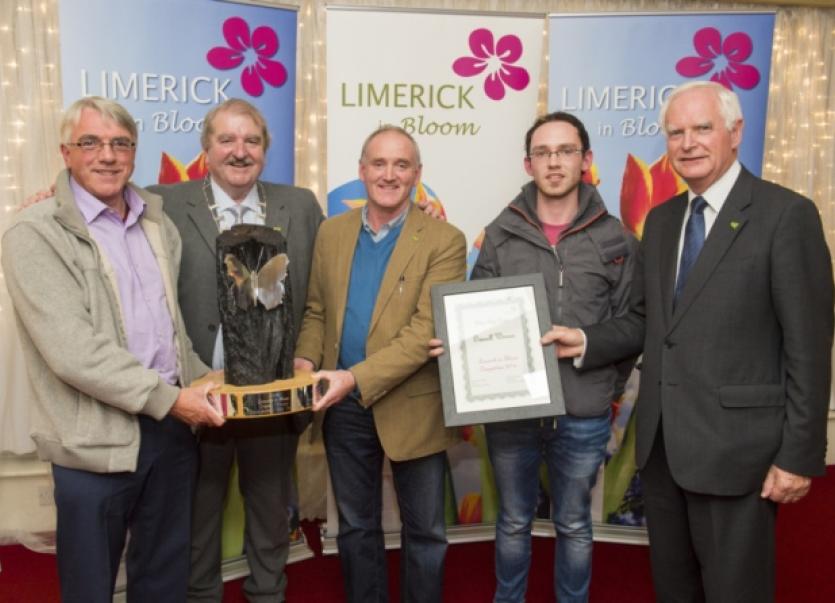 For the second year running, the West Limerick village of Athea has been named the overall winner of the Limerick In Bloom competition.

For the second year running, the West Limerick village of Athea has been named the overall winner of the Limerick In Bloom competition.

More than 40 community groups from across County Limerick were honoured for their participation in the annual competition, now in its seventh year, at an awards ceremony held at the Woodlands House Hotel in Adare.

Limerick City and County Council, in conjunction with sponsor JP McManus Foundation, once again hosted this year’s competition which serves as a motivational mechanism for small local-based groups throughout the County to enhance the visual impact of their settlements by means of flower, tree and shrub planting.

Cllr. Kevin Sheahan, Cathaoirleach of Limerick City and County Council also congratulated the Limerick In Bloom participants for making the competition a real celebration of community spirit, teamwork and awareness of the natural environment.

“While Limerick City and County Council is responsible for the delivery of a range of public services, it also has a responsibility to assist residents associations, businesses and voluntary groups to enhancing their local communities. Limerick In Bloom is one such vehicle for achieving this and we are delighted to officially recognise those communities and groups that have committed themselves to improving the visual appearance of their localities,” he said.

Gerry Boland of the JP Mc Manus Foundation also praised the Limerick In Bloom Competition and its participants for “making an invaluable contribution to the overall appearance of their local communities.”

He continued: “We are delighted to recognise and endorse the efforts of local communities in working towards the improvement of the beauty and natural environment of Limerick as a whole.”

Limerick In Bloom adjudication took place during the summer and considered such factors as colour, size, variety, location and appropriateness of the various planting schemes along with the management of litter.

Competition categories are based on population size with a first, second and third prize in each category of €1000, €500 and €300 respectively. The Overall Winner receives an additional €500.