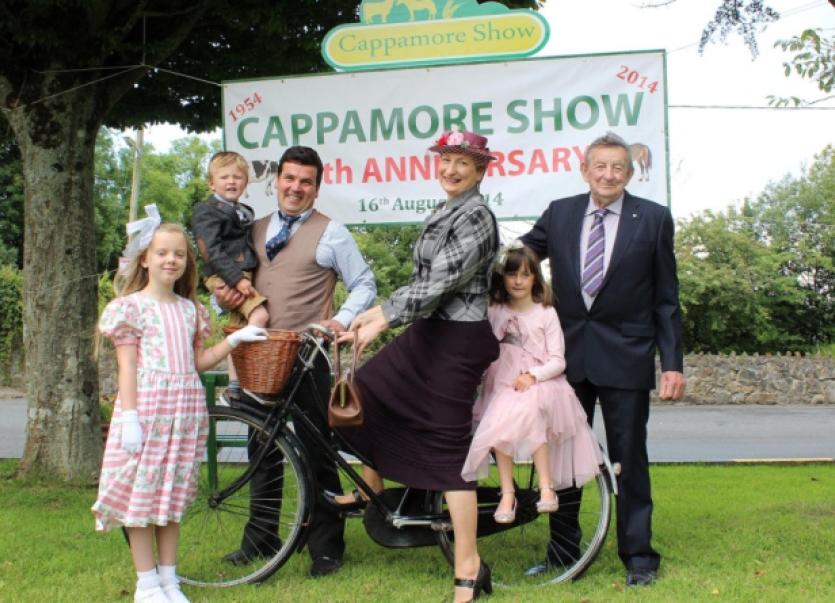 CAPPAMORE Show is celebrating its diamond anniversary on Saturday, August 16 and organisers promise a 24 carat event in Portnard.

CAPPAMORE Show is celebrating its diamond anniversary on Saturday, August 16 and organisers promise a 24 carat event in Portnard.

There is one continuous link to the founding members with Jimmy McCarthy. He was there from day one and he certainly couldn’t have foreseen that it would grow to the size of show that awaits the crowds on Saturday.

Generations of families are involved in the show and also in the photograph is young Jane Keating. She is a grandchild of the late Denis Keating - the first chairman of Cappamore Show.

The 140 strong committee are making a special effort to attract families this year. It is officially called an agricultural show and while there will be the best of cattle, horses, machinery and farm stands, there will be lots more to see and do.

One of many new additions this year is RTE’s Emma O’Driscoll. From 2.30pm she will tell stories, recite nursery rhymes and sing songs for children. Then later there will be hip hop and freestyle dancing for slightly older boys and girls.

Emma has strong Cappamore links now as she wed local man Liam Cronin, but long before that she was coming to the show.

“As kids we used to have a great time going out as a family from the city. There is something for everybody. Going out to the countryside was a great experience and seeing all the animals. We would have had lots of pets and entered them in competitions,” she recalled fondly.

As well as Emma’s talents, there will be a big red playbus, face painting, carnival, entertainment, games and lots more for children. The dog show and agility display, as well as the model farm will enthrall Emma.

“It is a brilliant show - it is not just for Cappamore, it is for people from all over Limerick city and county and further afield,” she adds.

Now through Liam, Emma has learned how much locals buy into their show.

“Everyone in the community helps out. There is great community spirit. When the show is coming up no matter what age the person is - everybody gets involved. Nobody wants to miss that weekend,” said Emma.

Earlier in the piece the excellent quality of cattle from around the country was mentioned. But no animal will be visited as much as Cappamore’s own Charlie Brown - the oldest bullock in the land.

His guess the weight competition is a fixture of the event.

“He is 13 and a half years old which is equal to 67 or 68 in human years,” said Agnes Coleman, of the Friends of Charlie Brown who have raised tens of thousands for good causes.

“He is now anxious to help older people in the local area so all the monies raised from the competition is going to St Michael’s Day Care Centre,” she said.

Show chairperson, Marie Hayes says they hope to put on the best show ever and with the weather forecast promising a mild day with sunny spells record crowds are expected to help organisers blow out the 60 candles.