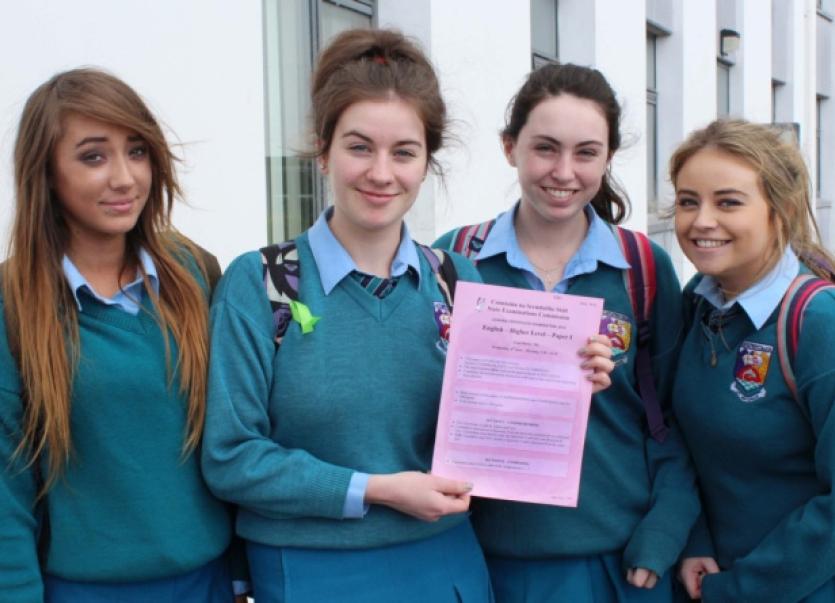 AFTER years of toil and study more than 5,000 secondary students sat the first of their Leaving and Junior Certificate exams this Wednesday.

AFTER years of toil and study more than 5,000 secondary students sat the first of their Leaving and Junior Certificate exams this Wednesday.

And the general consensus on English Paper 1 was that it was “kind to students” and didn’t present any major surprises.

“There was a nice choice of essays and a reading comprehension on Sherlock, the television series. One of the media studies sections was on screen writing which would be tricky enough but the other was on advertising which most students should be well prepared for,” said Sean Twomey, principal of Colaiste Iosaef in Kilmalllock where 75 students are completing the Leaving Cert and 81 students are completing the Junior Cert exam.

There was also a positive response to English Paper 1 at Castletroy College.

Padraig Flanagan, the school principal tweeted on Tuesday night: “Give it your best shot but also remember it is but one narrow measurement of your worth”.

“I have a huge interest in that kind of logic,” he told the Leader this Wednesday. “Even though I am in this education game, I do have grave concerns about the measuring of a youngster’s worth in a three digit number, but anyway, they still have to give it their best shot”.

The vibe on Wednesday morning at the school he said was “very, very positive”.

There were a few raised eyebrows when Roy Keane appeared on the Leaving Certificate ordinary level English paper.

And a few crestfallen faces that poet Seamus Heaney, beloved of students, appeared on the first paper, rather than the more taxing second paper.

The Nobel Prize winning poet, who passed away last August, had not appeared on Paper One since 2002, said students in the city.

Students Megan Waters, 18, from Hillcrest, and Jana Rondozai, 17, from Fedamore, of the Presentation girls’ school on Sexton Street were nonetheless hoping that Heaney may make a reappearance on Paper Two.

“It was easy enough; I thought it would be harder, but I was expecting Heaney for poetry [on day two],” said Megan, whose friends joked that they were happy for any other poets to appear on Paper Two - with the exception of Elizabeth Bishop.

Tom Prendergast, principal of CBS Sexton Street, said there was an overwhelming feeling of relief that what many view as the toughest exams of their life had begun and was now underway with a good start.

“Students were relieved that the exams are up and running now. They found the paper, at both ordinary and higher level to be very fair, there was plenty of choice there, and it’s a nice paper to begin with as it involves comprehension and essay writing,” said Mr Prendergast.

The 79 boys sitting their first days of exams - which run up until June 20 - had the added bonus of having the afternoon off as they were not sitting the home economics paper on Wednesday afternoon.

But it wasn’t just teenagers who were facing the dreaded exams. Up to 20 adult learners of all ages and from a variety of multicultural backgrounds were also sitting their exams nearby in the Limerick Adult Education College on Sexton Street.