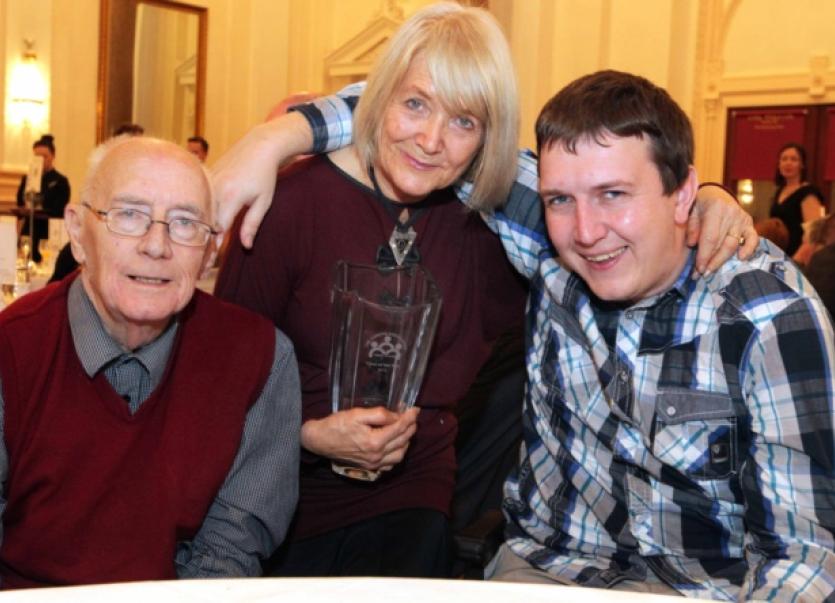 THE sterling work done by city woman Anne Curtin in caring for both her son Andrew and husband Michael has been recognised by the Carers Association.

THE sterling work done by city woman Anne Curtin in caring for both her son Andrew and husband Michael has been recognised by the Carers Association.

Anne, 70, collected the title of Irish Carer of the Year at a gala dinner in Dublin’s Westin Hotel this week, beating 17 other contestants from across the land to the title.

She provides full-time care for local writer Michael, who is paralysed by a stroke, and Andrew, 30, wheelchair-bound following an accident two years ago.

It was Andrew who nominated his mother for the Mid-West Carer of the Year prize to recognise her “unbelievable selflessness and kindness” and the “sacrifices she made for son and husband”.

After she took the title of Mid-West Carer of the Year, she was invited to the glitzy ceremony in Dublin, where she received the overall award from RTE stars - and patrons of the Carers Association - Marty Whelan and Mary Kennedy.

Speaking to the Limerick Leader, Anne said she was “shocked” to win.

Fortunately, on the advice of her son, she prepared a speech, in which she questioned the government’s commitment to carers.

But the Minister of State with responsibility for disability did not attend the awards ceremony - neither did any government representative - something with which both Anne and Andrew admitted they were disappointed.

Addressing the audience, Anne said: “There should have been someone here representing the Government today. Carers deserve better from the Government. All the cuts in the budget, the cuts to respite care. Why? Why are they doing it? Why are we letting it happen? People should be out protesting on the streets. The government are totally out of touch with our needs.”

She admitted when her name was called out to receive Carer of the Year, her “legs turned to jelly”.

“I genuinely wasn’t expecting it in a million years. I was very flattered to be one of the 17, and as far as I was concerned, that was good enough in my book,” she said.

Recalling the moment, Anne added: “We were waiting for our meal - I was ravenous, having not had breakfast. But suddenly then, I heard they were getting down to the overall carer of the year. I heard the name Anne come out, and I didn’t believe it. But when I heard Curtin, my legs turned to jelly!. But both Mary and Marty were lovely. They were very welcoming to me. There was no major formality about them.”

Regional manager of the Carers Association for Limerick and Tipperary Collette Devlin said she is “delighted” and “thrilled” at Anne’s win.

“While all the carers were worthy of the award, I was so proud of how she did. It is only when we see how much help carers give, you realise just how much they do,” she said.

Collette also said it is to Anne’s credit how well Andrew has done since his accident, explaining: “Sometimes the physical impact can be dealt with through technology, but it is the mental and psychological impact.”

Andrew added: “We were all a bit overwhelmed. When you went around the room and heard about all the nominees, I just felt there were people doing much better work.”