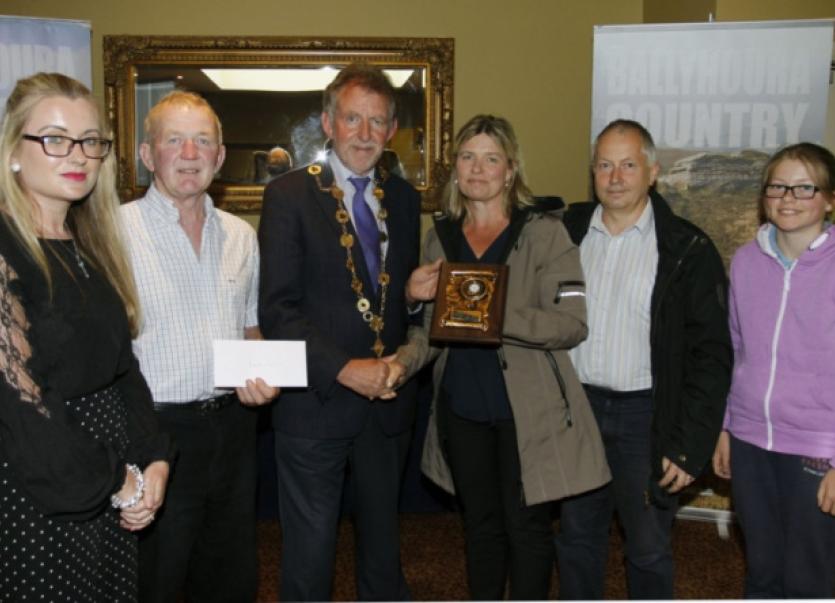 THIS years Ballyhoura Country Tidy Towns awards broke new ground with a record number of entries with the event being held in Castleconnell for the first time.

THIS years Ballyhoura Country Tidy Towns awards broke new ground with a record number of entries with the event being held in Castleconnell for the first time.

History was made as Mayor of Limerick, Michael Sheahan presented the prizes with Amanda Slattery, of Ballyhoura.

“It was the first mayoral visit to the old county part of the new metropolitan district. I am a Ballyhoura board member and have seen for myself as a councillor the great work that has been done in Castleconnell,” said Mayor Sheahan, who has gone from being a county councillor in the old Castleconnell electoral area to being Mayor of Limerick in a matter of weeks.

Villages all over county Limerick are preened to perfection for the arrival of another Tidy Towns’ season. R

epresentatives from across Ballyhoura country gathered to celebrate the achievements of the past year at the 23rd annual event held in the Castle Oaks House Hotel.

Awards were based on an improvement in marks from 2012 to 2013. They cover all 10 categories from the national competition with an amalgamation of categories for the purpose of the Ballyhoura Country awards.

Adjudication reports from 2013 again showed much improvement across all communities participating in the national competition from the Ballyhoura region, said tourism and heritage officer, Amanda Slattery.

She said it reflected the amount of hard work and dedication of all of the Tidy Towns’ committees and communities across the region.

Chairman of Castleconnell Tidy Towns, Vincent Warfield made a presentation to Mayor Sheahan on his first official function in Castleconnell and was congratulated on his appointment by Ms Slattery and all committees present.

“They led groups on an informative walk taking in the nature walk along the Shannon, bedding areas, water harvesting system by the church, Mick Mackey Statue and the beautiful streetscape of Castleconnell,” said Ms Slattery.

The night also allows groups to share tips and advice and perhaps put them in place in the future. Mayor Sheahan thanked Castleconnell Tidy Towns for the present piece of cut-glass to mark the historic visit.

He paid tribute to their work, Castleconnell Project Employment Scheme, and all the Tidy Towns volunteers who work tirelessly for the betterment of their communities.