Skier Conor flies the flag for Limerick at Winter Olympics 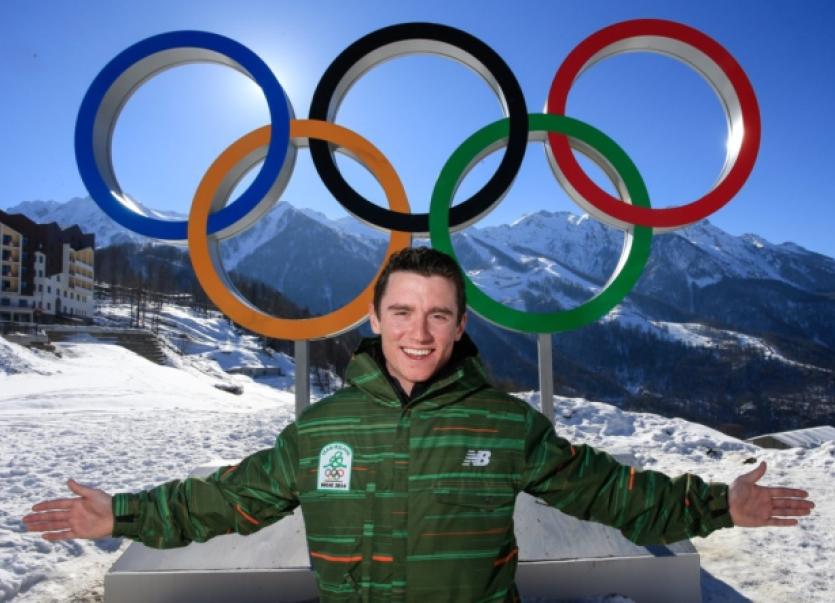 WINTER Olympic hopeful, Conor Lyne – whose mother hails from Hospital – has described carrying the Irish flag at the opening ceremony of the Games in Sochi as “the proudest moment of my life, by far.”

WINTER Olympic hopeful, Conor Lyne – whose mother hails from Hospital – has described carrying the Irish flag at the opening ceremony of the Games in Sochi as “the proudest moment of my life, by far.”

The 20-year-old alpine ski racer, who will be competing in the winter games next week, flew the flag for Ireland at the parade of nations during the opening ceremony in the Russian city last Friday.

Over 80 nations participated in the ceremony. “It was such an incredible experience being able to carry the tricolour,” Conor told the Leader from Russia this week.

Despite sustaining a shoulder injury during training on Monday, Conor is adamant that he will compete for Ireland in the slalom and giant slalom - the first of which takes place on Wednesday, February 19. He competes again on February 22.

“I’ll definitely be skiing, no doubt about it. I didn’t come all this way not to ski. It’s sore right now but it’ll be grand.”

While Conor’s father John is a Kerryman, from Brandon, his mother Anna is a proud Limerick woman, hailing from the village of Hospital. When their employers — a Dutch dairy-industry company — opened a base in Utah, the Lyne family all moved there when Conor was just four years old, and continue to live there.

Conor last visited Hospital over the Christmas period and considers Ireland to be his home.

“I’ll pay another visit after the Games,” he said. “I consider myself an Irishman and am very proud to have a Limerick mother as well as a Kerry father.

“When hurling is being played, I cheer on Limerick,” he smiled.

In preparation for his competitions, Conor trains three days on the slope and then takes a day off. He does gym work nearly everyday.

What he particularly enjoys about skiing, he says, is the freedom.

“It’s just you, your skis, and the mountain. The adrenaline is also a nice thing to have!”

Both Conor’s parents, Anna and John, and younger brother Sean, 18, will travel to Sochi next week to see him in action.

Sean was also a ski racer and represented Ireland at the European Youth Olympics in Liberec in 2011,

Her parents Mick and Alice O’Neill - who have sadly passed away - ran a family business, O’Neill’s grocery and hardware store, and bar on Main Street, Hospital as well as O’Neill’s Haulage.

“I come from a family of nine – six girls and three boys,” Anna explained. “My brother Jimmy lives at home and runs the family business.”

While many of her siblings live in various locations around Ireland and in the US, her brothers Micheal and Lawrence, and sister Christina, like Jimmy, stayed close to home - they live in Hospital and just outside Galbally.

Anna left the village in 1977 and moved to Cork to work at UCC.

The mother-of-two says she was “extremely proud” to see her eldest son carry the Irish flag at the spectacular opening ceremony in Sochi. Her only wish was that her parents could be there to see their grandson’s moment of glory.

Anna’s father, Mick, was a passionate GAA supporter all his life. He also had four All-Ireland junior hockey titles to his credit and probably holds a national record for Croke Park attendances. “In 67 years he missed only one All-Ireland and that was the year I was born, September 8,1958,” Anna smiled.

To participate at the Winter Olympics in Sochi has been a goal of Conor’s since he was 14. “We are extremely happy for Conor that his dream has come true and also that Irish snow sports athletes are getting recognition for their efforts and achievements,” said Anna.