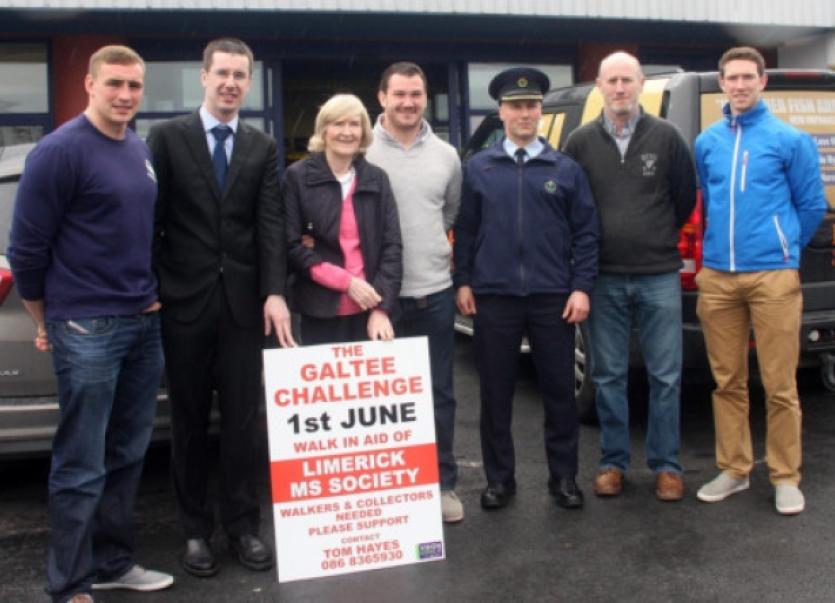 PRAYERS will be said at this year’s Galtee Challenge for two men who have been an integral part of the walk.

PRAYERS will be said at this year’s Galtee Challenge for two men who have been an integral part of the walk.

Now in its fifth year, the event takes place on Saturday, June 1 at Galtymore near Mitchelstown. It started with just 50 people but last year it climbed to 325.

To date they have raised almost €70,000 for the Limerick branch of the Multiple Sclerosis

“I said to him we needed to raise money and he suggested a walk in the Galtee mountains because he knew them well. He had been walking them since he was a boy,” said Mr Hayes.

Mr O’Donnell passed away at too young an age last year. PJ Richardson, from Doon, was also taken from his loving family before his time at the beginning of this year.

Mr Richardson, who suffered from MS, had completed the walk in recent times.

“He enjoyed meeting the people at the barbecue afterwards as well. There is the whole social side of it too.

“We are doing the walk in memory of Roger O’Donnell and PJ Richardson. Fr Pat Hogan, parish priest in Southill, has agreed to do the walk and say some prayers for them,” said Mr Hayes.

The event will be signposted from Mitchelstown and sponsorship cards are available from Tara House, near the Crescent Shopping Centre, or any MS Limerick committee member.

All the money raised will be kept in the Limerick area. Even the sponsorship cards are free as they are printed in Limerick prison where Mr Hayes was a warden.

It will go towards paying for physiotherapy, therapists to visit people at their homes, fuel allowances, and more.

“It all goes towards helping improving the lives of people with MS,” said Mr Hayes.

There are around 200 members of the Limerick branch of Multiple Sclerosis, which is an autoimmune disease that affects the brain and spinal cord.

It has many symptoms including limb weakness and difficulties with co-ordination and balance; muscle spasms; fatigue and numbness.

“It’s the one thing about MS - you need to keep active and if possible keep getting exercise so a walk is perfect,” said Mr Hayes.

The leisurely walk, suitable for all ages and abilities, starts at 11am and finishes around 2.30pm. Kelly’s bar in Doon are providing a barbecue from 7pm and raffle of spot prizes takes place.