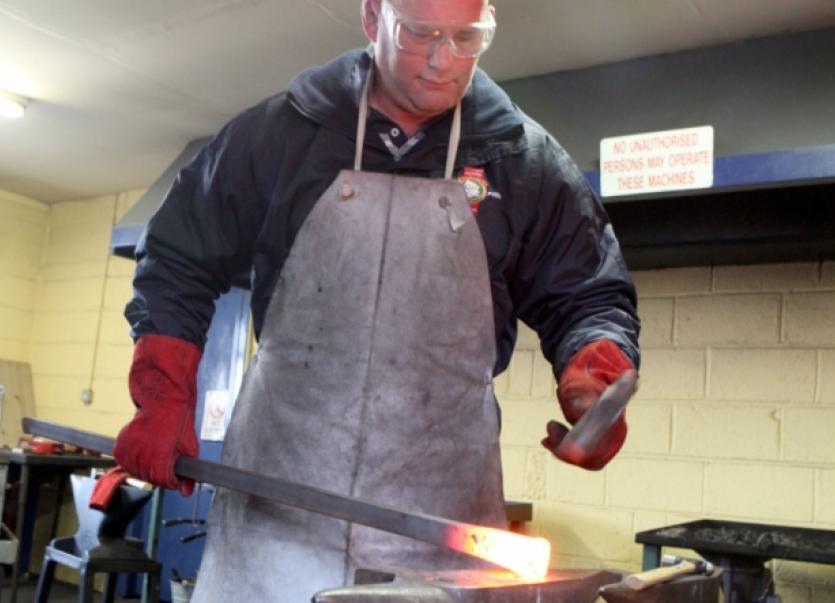 JOHN HAYES went to see a monument being made in his honour at the weekend – and even had a try at forging.

JOHN HAYES went to see a monument being made in his honour at the weekend – and even had a try at forging.

The Cappamore, Bruff, Shannon, Munster, Ireland and Lions legend is well placed to appreciate the skill involved as he was a welder before he went on to rugby stardom.

Eric O’Neill, artist blacksmith and teacher, designed the bench featuring a charging bull with a rugby bull at his feet. It is being made by Eric and his students in the LCFE East Limerick Campus in Cappamore and in Eric’s own forge.

John popped down on Saturday to see it taking shape.

“It is an amazing piece of work. It is being made using all the traditional blacksmithing techniques with a forge. Eric is so passionate about his craft and you can see the amount of effort put into it by Eric and all the students,” said John.

Michael O’Connor, centre manager, approached John asking would he mind it being made in his honour.

“Sure, you couldn’t mind about something being done in your own homeplace,” said the notoriously modest John. The plan is that it will be erected near the library in Cappamore in June.

The iron man on the rugby pitch had a go at bending mild steel in the forge. It went against his natural instincts of welding metal together.

“I think welding is a dirty word to Eric! He uses all the old techniques – there is tremendous effort, patience and skill going into it. It is a one off,” said John.

When the Leader ran a story about of the ‘Bull bench’ a few weeks ago it got a huge reaction and was one of the most popular stories on the website. It is down to the enduring affection that John is held in within all walks of life, but he is just happy to see the LCFE East Limerick Campus in Cappamore being highlighted.

“It is a wonderful facility to have here. There were concerns that it might be closed after the new school in Doon was opened but it has gone from strength to strength,” said John.

Eric says the bench celebrates the story of “a local sporting hero, a humble man that shuns the limelight and what he has achieved through sport”.

“It’s simple – it’s belief in what you are doing, enjoying it and eventually excelling in this expression, whatever that may be. This bench, like most good and positive stories, shares a common thread – it’s community goodwill. The goodwill that’s out there for such projects cannot be underestimated. It is seldom do we get the opportunity to join the dots, where people combine their efforts and achieve something special.

“It’s a celebratory piece through the craft of the smith, many smiths, that tells its own tale, be that of the beauty of traditional joinery or the contemporary design and execution of artistic flair. It’s a story of student, master, facility, workshop and the greater community of smiths adding to the piece and occasion. It’s a celebration of craft, passion, friendship, the joy of sport, of rugby and a shared focus.

“It’s the greater community getting behind the project, the local community organisations, steel suppliers, galvanizing firms, builders, education bodies and facilities. It’s those education developers that have the foresight to look outside the box and inspire.

“This is what makes it special – it is the sixteenth man!” said Eric. Heiton Buckley, Shannonside Galvanizing, Earle Landscaping and Clyno Construction all came on board with help.

Michael says they are very proud of the fact that they are the only centre in the country offering an accredited programme in forgework/ironcraft. An open day in the college takes place on Wednesday, May 6 from 10am to 6pm. Prospective students can enrol in the wide of range of courses. See www.lcfe.ie for a full list.