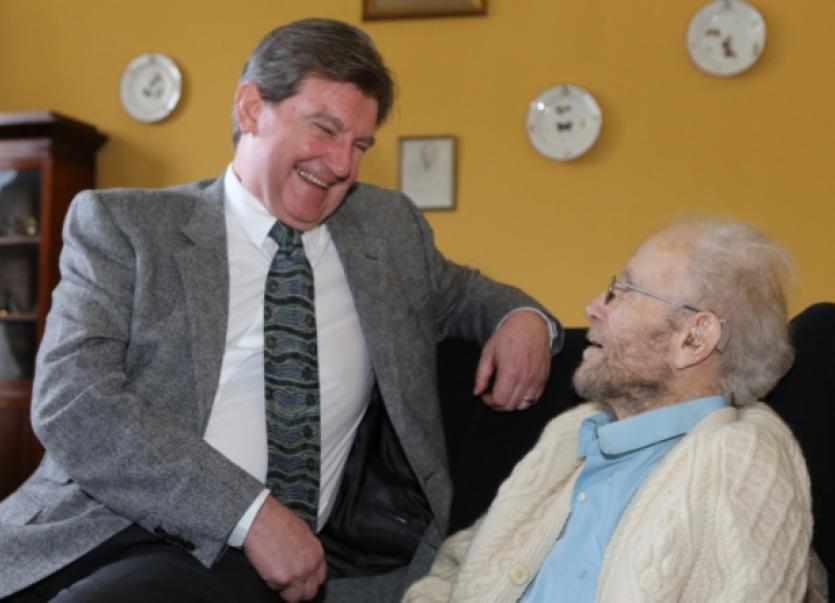 “He was wonderful, he was totally unique - we are all unique - but he was more unique than most.”

“He was wonderful, he was totally unique - we are all unique - but he was more unique than most.”

The touching words of Patricia Haselbeck Flynn on the late Gerard Bourke, aged 92, of Thornfield House, Lisnagry. While not related by blood the two were like family.

The Australian ambassador to Ireland, Dr Ruth Adler, recently attended a memorial service of thanksgiving for the life of Gerard Bourke in All Saints Church, Castleconnell and interment in the family tomb in Stradbally graveyard,

Dr Adler made the special visit to Limerick on account of the Bourke family’s important ties to Australia.

He was the great, great grandson of Sir Richard Bourke and the last remaining male blood relative.

Sir Richard Bourke was born in Dublin in 1777 to Limerick parents - John and Anne Bourke, of Dromsally, Cappamore. In 1831 he was appointed Governor of New South Wales in Australia and his contribution to the early decades of the country is taught to every child in school.

One of the big streets in Melbourne to this day is Bourke Street. In later life Governor Bourke returned to Limerick and lived in Thornfield House.

Unlike many landlords, he was very well liked and built a school in Ahane for local children. When the British Government built a barracks for him to protect him from the Fenian element he told them that he “needed no protection from his own people”. He turned it in to a dispensary for the community.

That popularity in the locality passed through the generations to his last blood relative who passed away at the end of May.

“Gerard was a huge character, he had a great sense of humour, an acerbic wit. He was a very cultured man, quite irreverent at times with this humour of his and he had that inherent innate good manners that came from that generation,” said Patricia.

“He was great fun. His drawing room was directly under my bedroom. As time went on, he was a very early riser and he would play Wagner at full belt and I could wake up at 5am hearing the Ride of the Valkyries. His hearing went slightly but sometimes he would pretend it was worse than it was to block out what he did not want to hear,” she smiled fondly.

When they bought Thornfield House, Gerard continued with a protected tenancy in an adjoining apartment for his lifetime.

Along with Patricia, Seamus Flynn and sons Sean and Darragh also grew incredibly close to Gerard.

“He was to them almost like a grandfather, he was my son Darragh’s godfather,” said Patricia.

Gerard lived life to the full. He pursued his great love of music in London and later became music critic for the Irish Times and was a contributor to RTE.

He travelled throughout Europe on a motorbike to see every opera that ever was. Like his ancestor, Gerard returned to Thornfield in later life.

At the memorial service were his nephews John and David van Bevan; other relatives, Patricia and the Flynns and a wide circle of friends including Dan and Nancy Lawless. It was conducted by Dean Gary Paulsen and included a tribute by John van Bevan and granddaughter Daire and readings by David van Bevan and the Australian ambassador.

Sean, Darragh, Seamus Flynn and Dan Lawless led the prayers. The organist was Trevor Selby and Barbara Hartigan and Margaret Jackson had the church looking immaculate.

Dr Adler offered her condolences and deepest sympathies on his passing.

“My predecessor had the pleasure and privilege of meeting Mr Bourke in November 2012 and was greatly impressed by his vitality and knowledge of his family history.

“His ancestor, Sir Richard Bourke, left an indelible mark on Australia like so many other Irish men and women. He was a visionary who, as one of the most noted Governors of Australia of the 19th century, distinguished himself through his contribution to social and legal reform, and the formation of modern Australia,” said Dr Adler.