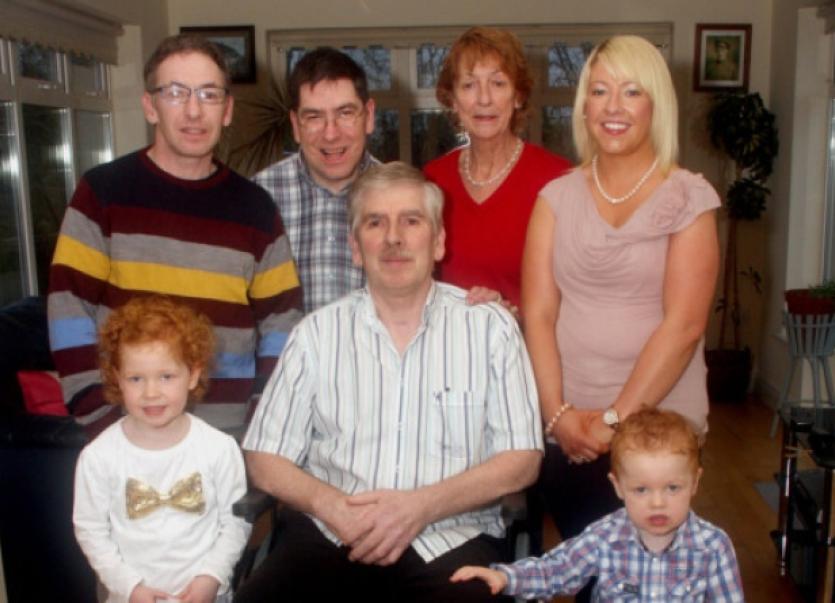 A LIMERICK man left paralysed overnight is back home in the loving arms of his family for the first time in 245 days.

A LIMERICK man left paralysed overnight is back home in the loving arms of his family for the first time in 245 days.

John Mangan, from Manister, contracted Guillain–Barré syndrome. It is so rare that there are only one to two cases per 100,000 annually.

Despite this, ambulance personnel and staff in Limerick University Hospital quickly spotted the symptoms and saved his life. He has spent the last eight months slowly regaining his health in the hospital and National Rehab Unit in Dun Laoighire.

John says the virus strips all the nerves from the body and instead of the immune system fighting it, “it turns in on itself”.

Months were spent flat on his back in ICU and Ward 3A as he had no movement from his shoulders down. He couldn’t speak or breathe on his own. It all began with a “bit of a cough” on May 31. John, a carpenter by trade, was just after finishing a beautiful stone wall in front of the house he built himself. Little did he know in a matter of hours he wouldn’t be able to lift his hands.

“I didn’t feel well so around 5.30pm I said to my wife Goretti that I was going up to bed for an hour. Suddenly the room was blazing - I felt like I was on fire. I thought it was a fever so I took some paracetamol to bring down the temperature.

“Around midnight I couldn’t grip with my hands and my legs wouldn’t move. I slid out of bed and fell flat on my face. My wife and son heard the bang and called an ambulance,” said John.

He found out later that when his breathing went the next day an anaesthesiologist had to pump his chest with his hands to keep him alive.

“I remember the doctors putting the tube down to ventilate my lungs and I could find the relief,” said John, who credits ambulance staff, Dr Brian Casserly, Dr Elijah Chaila and ICU staff for saving his life.

“That night I had a desperate night, the worst night of my life. I was just so sick in my body, it consumed my whole body, I was so weak, I felt rotten. The nerves were being stripped away and I don’t remember any more. I couldn’t tell you what day I woke up or when it was,” said John.

Plasmapheresis, a procedure to put artificial plasma back into the blood took place but he didn’t know anything about it. Three weeks were a blur.

What was keeping his wife Goretti and three children - Owen, Pat and Amy - going was the knowledge that most patients make a full recovery, and the care in Dooradoyle.

Amy says as well as taking care of their dad, staff practically counselled them and reassured them that their father would get through this.

After 28 days John’s knee quivered and they knew he was on the long road to recovery. In a way John had locked in syndrome as he couldn’t move or talk. But he never once let his spirits drop.

“Once I got the full explanation as to what it was and there was a good recovery chance I got it into my head this is going to be one day at a time.

“I had psychiatrists on two occasions call to me to ask me was I down? To me I was never down.

“They couldn’t believe I was coping so well, most of the time I wasn’t in pain. I put it down to the care I was getting in the hospital, and my own family, all my brothers and sisters and brothers-in-law and sisters-in-laws were there full-time. All of that combined brought me though the worst of it,” said John. Being a massive hurling fan, watching Donal O’Grady lift the Munster Cup on his little portable TV certainly gave him a lift. But the best was yet to come.

“You have to be a patient to realise the care you are getting. You feel every bit of care, it is unbelievable - you sneeze and they are there, anything at all they are there for you. They couldn’t do enough for us,” said John.

On a couple of occasions they even wheeled John out of ICU so he could see his grandchildren Lucy and Tommy. And if that wasn’t enough, one of the nurses spotted the joy in John’s face when the Limerick hurlers put Cork to the sword.

Despite not knowing any of the panel she managed to get word to them that a visit would mean the world to John. Donal O’Grady, Wayne McNamara, Niall Moran and Tom Condon duly slipped it to see him one Friday night after training and gave him a sliothar signed by all the team.

“I saw these four tall lads come in and I thought I was hallucinating again,” smiles John, who is speaking at his kitchen table in Manister.

“It was unbelievable for the lads to come in when they were so busy. I knew Wayne, Niall and Donal and was able to recognise Tom from watching him play underage. With the helmets these days you don’t see their faces. Wayne worked with me for a summer after school for experience. They are four gentleman. It was a great boost to me,” said John.

Niall Moran recently posted a message on Facebook wishing John well on his return home. The nurses also arranged for Limerick flags to be put behind his bed and sang him happy birthday when he turned 65 on August 5.

The recovery continued slowly but surely and after 44 days he could talk again without a speaking value. After 77 days he left ICU for Ward 3A. And on October he left the University Hospital Limerick to get rehab in Dun Laoighire.

“All my muscles were useless, I had no power so I had an awful lot of physio to build them back up,” he said.

Now he is able to lift his arms up to his head and walk short distances. After a few days in Manister over Christmas, John was back for good on January 25. Physio will continue but every day he is making progress.

John and the Mangan family wished to thank the ambulance crew, doctors, nurses, physios and all the staff in ICU and Wards 3A in University Hospital Limerick; staff in Dun Laoighire and the Limerick hurlers for all helping him get back on his feet.

They don’t know what caused Guillain–Barré syndrome, but they do know he never let it beat him or get him down. John would like to share his experience with others who have contacted the rare virus. Just email amytreecekeys@gmail.com

Last August the Limerick hurlers came to see John in his hospital bed. Now, he hopes to see them in the flesh in Thurles when they take on Tipperary on June 1 - a year to the day he fell ill.