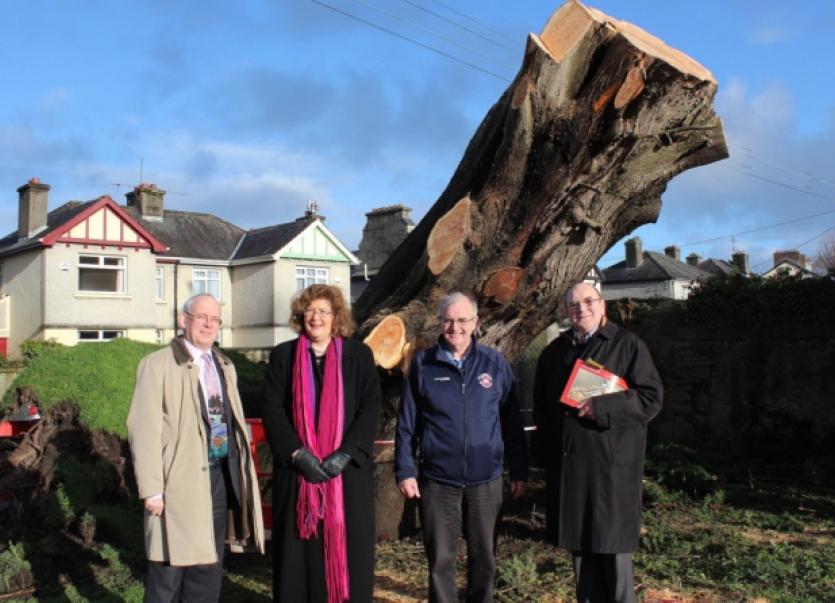 AN ANCIENT well has been discovered under a tree felled by the violent storms opposite Mary Immaculate College.

AN ANCIENT well has been discovered under a tree felled by the violent storms opposite Mary Immaculate College.

Hundreds of trees fell to the ground across the county in the violent storms last week, including a limetree at Mount Gerard Court on the South Circular Road.

When local residents inspected the damage, they were surprised when they discovered an ancient well underneath the uprooted tree.

With the tree set to be cleared, Cllr Maria Byrne now wants to ensure the well is preserved and conserved.

Local historian Dan Clery, of Sarsfield Terrace, believes the well has been in place since 1878, with the tree built on top of it around the turn of the 20th century.

This is on the basis of the red brick used on the well, which matches that used on homes in the South Circular Road.

“From what we saw yesterday, the roots have grown around the well. It [the tree] was probably alongside it at some stage, and spread out. Something has to happen with this: it cannot be left to be buried up again. I have submitted a notice of motion yesterday looking for it to be preserved and conserved. I think we would have to bring in a group like the Civic Trust, who have expertise in the area, and a conservation artist,” Cllr Byrne said.

She has submitted a notice of motion to this effect, to be heard at next Monday’s full City Council meeting.

Mr Clery said the tree fell in an easterly direction.

“It must have been a westerly wind which came and blew it eastwards, which is why it had fallen back towards O’Connell Avenue then down towards Henry Street,” he said.

Mr Clery reasoned that the well would have been outside this house.

“When I saw red brick, I thought it was a bit strange. A cottage there before must have had a well with it.

“In Charlie’s photograph, there is a small thatched cottage of one-storey. The cottage would have been adjacent to that well,” he explained.