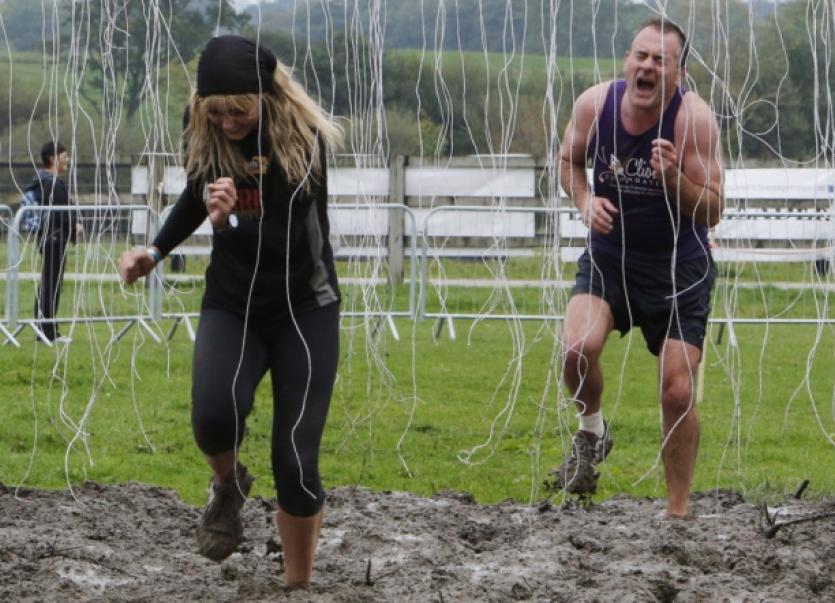 “AND you signed up to do that voluntarily?”

“AND you signed up to do that voluntarily?”

It was the question most commonly put to me – and no doubt many others – when I said I did Adare to Survive, on Sunday last. People looked puzzled when I mentioned the name, and aghast when it was explained that it was the first 7.5km military style assault course to be held in the county, on the grounds of Clonshire equestrian centre.

It was just your average leisurely Sunday afternoon, of crawling under barbed wire, wading through pits of mud, climbing bales of hay stacked 20ft high, navigating two courses wired with electric shocks, and trying to springboard ourselves over fences built for horses, where the dismount was rarely graceful.

And when we thought we had conquered the toughest challenges, they then handed us a concrete block to haul around just to keep us from slackening off, and got us to crawl in darkness in an underground tunnel. Any phobias of heights, water, and confined spaces were put to the test here.

The answers were, ‘Yes’, and ‘Yes’. Thankfully some 600 people were just as mad to do it – and many have vowed to do it again. It is not your average 10km run through a concrete city, with knees hammered by the tarmac. It was electric - in every sense - with over 30 natural occurring and man made obstacles to challenge the body, mind and perceptions of what you could and couldn’t do. Unlike the solitary nature of running, this was a course where complete strangers waited to give you a hand or leg up, and stayed back until you were firmly on your feet. The finishing time was inconsequential. This was truly a marathon (team) effort, and not a sprint.

“We wanted this to be an experience that participants would remember forever,” explained event director Ray Nash, who came up with the idea earlier this year.

The real feelgood factor about the event was “the incredible sense of personal achievement at completing the course.

“It’s not every day you find yourself getting into a skip of iced water before crawling on a mud bank under a bed of electric wires.”

Fellow director Mark Tuohy was responsible for the course design and said that the event slogan “Endeavour | Endure | Enjoy” was at the heart of the creative process.

“We were determined to produce an original course of the highest quality by incorporating the four elements of earth, fire, water and air. People had no idea what to expect.”

Gerard Burke of UK Biggest Loser fame took part, along with TV presenters Leanne Moore and Aidan Power of RTE, who tweeted “Electrocuted, burned, submerged and buried, all for a great cause.”

Tara O’Shaughnessy, originally from Florida, and now living in Askeaton took part after losing nine stone in two years. The event was in aid of the Limerick based Cliona’s Foundation, which supports families of critically ill children.

Brendan Ring, of the foundation, said the “sense of community was so heartwarming,” and he completed the course in spite of an ankle injury at one of the final obstacles.

There are now plans to make Adare to Survive an annual event, with an added twist for 2014.

However, with the popularity of such courses on the rise, they have received inquiries about taking it to other settings in Ireland.

As the aches and pains subside, no doubt many will follow them.