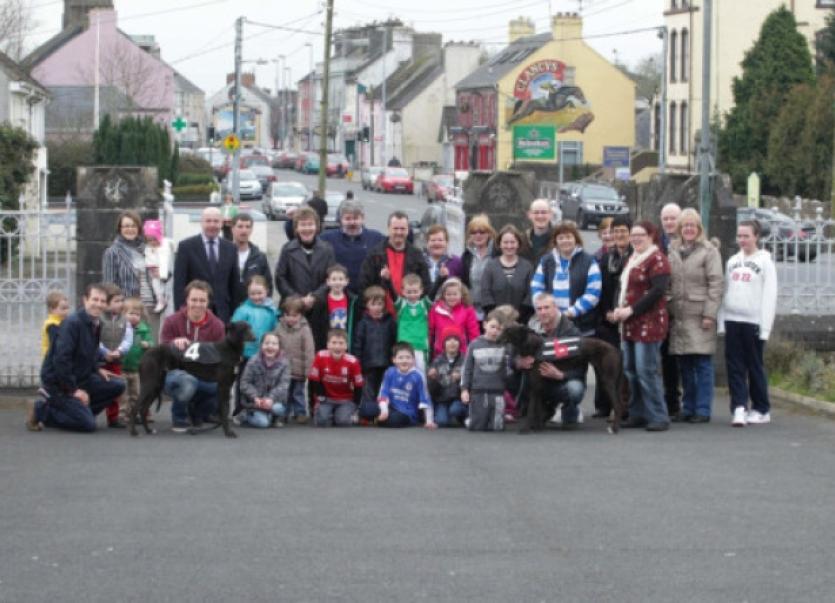 A MAJOR fundraising initiative has been launched in Bruff to ensure that the town’s long-awaited playground becomes a reality for the sons and daughters of the area.

A MAJOR fundraising initiative has been launched in Bruff to ensure that the town’s long-awaited playground becomes a reality for the sons and daughters of the area.

Not one, but two, fundraisers have been organised by a reinvigorated committee in the town to raise the finance necessary to push to project over the finishing line.

“We are looking to raise €30,000 – that is the target number we have, to match the Ballyhoura grant,” explained John O’Riordan of the fundraising committee.

“Already close to €6,000 of that has been raised. Over the weeks and months ahead we are looking to raise the rest of it,” he added.

The community are currently organising a night at the dogs at Limerick Greyhound Stadium on Saturday, May 11.

The programme for the night includes the valuable Roches Feeds Munster Oaks and features the auction of a greyhound pup specially selected by leading trainer, Paul Hennessy.

“The novelty of the event plus the comfortable facilities at the stadium, with children under 16 going free, makes for a very inclusive night out,” said local businesswoman Miriam Sadlier “and I’m looking forward to going with my kids”.

Prior to the night at the dogs, the community will be monitoring the progress of an altogether slower athlete – the plastic duck.

“More than half of the 700 ducks in the race are already sold,” said chairperson of the fundraising committee, Valerie O’Donovan, herself a mother of triplets.

The ducks will set sail at 4pm – directly after the St Patrick’s Day parade - between the bridges near the primary school.

Planning permission has been secured for the new Bruff community playground which is to be located off Bru na nDeise housing estate near the soccer field. The playground is to cater for the parish of Bruff, Grange, Meanus, and Holycross and other local communities such as Lough Gur, Patrickswell, Knockainey, Athlacca, and Dromin.

“Currently, we are completing the legal process for the final transfer of ownership of the site from Limerick County Council,” explained Richard Leonard, project manager/engineer.

“At the same time we are finalising the equipment selection and tidying up some details requested by the council during the planning process.”

While the dog night and the duck race are the main fundraisers, there are also a number of other initiatives in the pipeline including bag-packing and a 10k race. “The idea is that as soon as we have a significant amount of funding, we are going to move ahead. We would be hoping to get it started as soon as the dog race is over – that would be the end of May. Our plan right now is to have it done by end of year but if I was optimistic about it, I would be looking to have it done by September,” said John O’Riordan.

“Now that the County Council have provided a location and Ballyhoura have the grant aid available to them, they are just looking to get the community behind the project. Over the last couple of weeks, the enthusiasm within the community has been really great. Everybody is all excited about this. Everybody is anxious to push it along so hopefully it we can make it work out.”