Farmers delight as silage is cut in Limerick 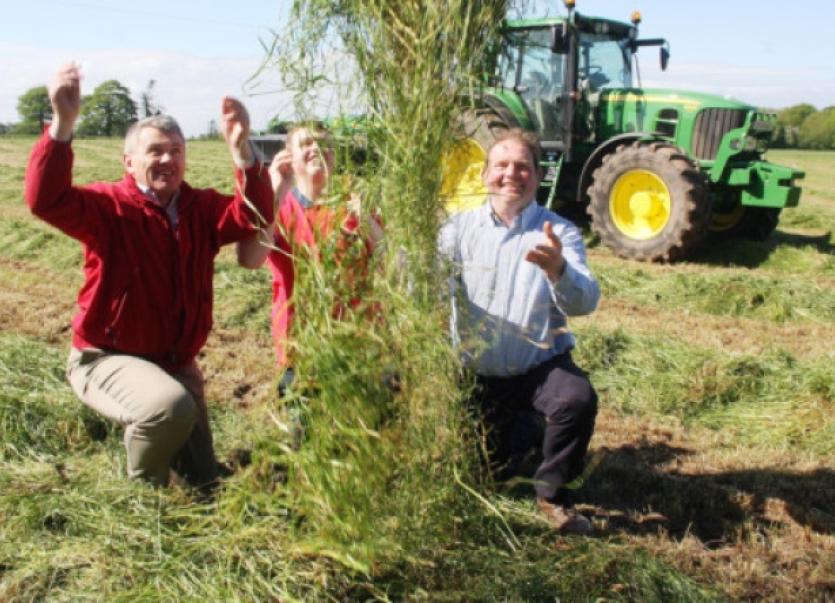 AFTER A NIGHTMARE five months for Limerick farmers things picked up this week with the improvement in the weather.

AFTER A NIGHTMARE five months for Limerick farmers things picked up this week with the improvement in the weather.

And Michael McSweeney plans to pick up 17 acres of silage he cut on Monday this Thursday.

The Patrickswell farmer is one of the first to officially get the silage season underway. Anything else that was cut was probably out of desperation due to the fodder crisis.

The progressive dairy and beef farmer with good land considers himself one of the lucky ones, and even he only had two bales of silage left.

“Last year we had 163 bales left over. The good weather this week should get a lot of fellows out of jail.

“At least they can get cattle out to graze. There is land with grass that can’t be grazed because of the bad weather, it is too wet.

“My own brother is farming in Cappagh, up to a week ago some of his fields were under two or three inches of water. It’s been a brutal year,” said Mr McSweeney.

He cut the silage himself, will turn and bale it too. But he has great help from his 14-year-old son Daniel.

Indeed, it was Daniel who e-mailed the Leader to tell us about “the beginning of the baling season across the country”.

“No one has it cut yet. People are hoping to cut it in two weeks time, the fields are too wet,” said Daniel, who knows his stuff.

“Silage is an awful lot of hard work but I don’t mind it. I love farming,” said the second year pupil in Salesian Secondary College in Pallaskenry.

If this year doesn’t put him off farming then nothing will. The family is completed by mum, Deirdre and sister, Sarah.

“That was the key last year with farmers and I think it is going to be the key this year.

“A person making clamp silage last year, he either hit it at a good weather time or a bad time so he either got good silage or bad silage.

“Last year with baled silage you had some good baled silage and some bad bales but you could mix them,” he explains. Michael plans to bale another 30 acres at the beginning of June, more in the middle of the month and continue in stages. The fodder crisis may be easing but he warns about the future.

“The IFA and co-ops are doing great work but the Government should do more because I don’t think they realise how serious things are for the coming year.

“Some think it is grand now - that there is plenty of grass growing - but that is not the case. It is next autumn and spring that is going to be the killer,” said Michael.

He says there should be a subsidy for farmers on expensive fertiliser.

“The cost of fertilizer is a big problem. Help farmers give a good push on fertiliser and help prevent this happening again. We are a country for exporting not importing hay,” he says. The forecast for the weekend remains mainly dry but Met Eireann warns that next week looks like becoming unsettled with cooler conditions and some rain at times.