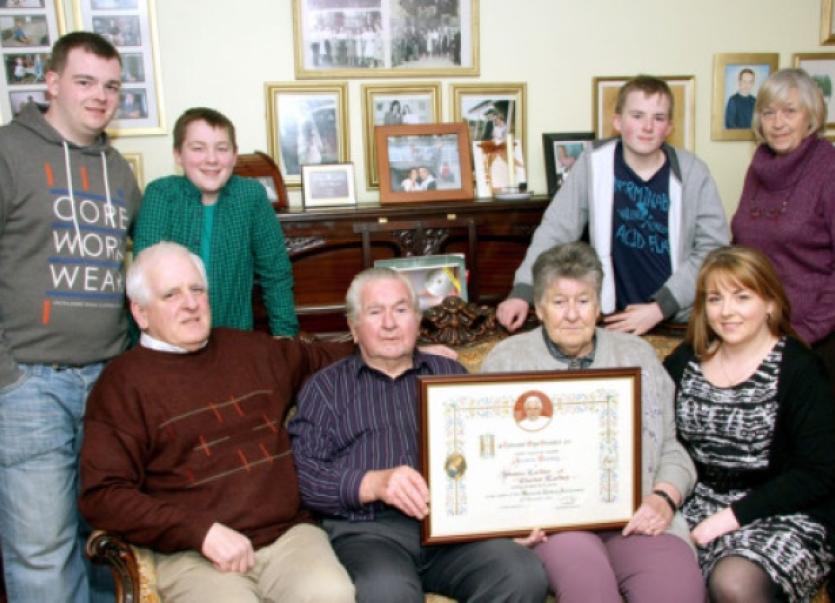 A COUNTY Limerick couple have even more reason to celebrate 60 years of marriage as they have a unique papal blessing hanging on their wall.

A COUNTY Limerick couple have even more reason to celebrate 60 years of marriage as they have a unique papal blessing hanging on their wall.

Days before Pope Benedict XVI became the first pontiff to step down in 600 years he continued to give papal blessings.

Charles and Johanna Early, Caherconlish received one of the blessings on Wednesday, March 6.

The Pope left the Vatican in a helicopter on Thursday, February 28 meaning that the Earlys have one of his last Papal blessings.

One of their sons, John, thought it would be a nice surprise for the hale and hearty couple to apply for a papal blessing on their behalf.

“It was through Pat Hourigan, the local correspondent for the Limerick Leader, that it came about.

“He put a piece in his notes to mark their anniversary and he advised me I could apply for a papal blessing,” said John.

Canon Liam McNamara gave him a letter and he went to O’Mahony’s in O’Connell Street to choose a parchment. The blessing is then organised through the Vatican. The bookshop is one of the few in Ireland that provide the service. John brought the surprise to his parents last week.

“They were thrilled. While we were looking it and admiring the handmade parchment with beautiful calligraphy we started thinking.

“As I only got it that day it could have only been blessed by his Holiness the Pope in his last days as the Pope,” said John.

O’Mahony’s confirmed it is the last 60th wedding anniversary in Limerick to be blessed. Meaning it must be one of Pope Benedicts’s last ever papal blessings sent to Ireland.

“The fact that they got a blessing from his Holiness the Pope in Rome was wonderful but to be able to say that it is very probably the last one that ever came into Ireland is a piece of history.

“It is lovely for my mother and father who have had such a long life together,” said John. Charles and Johanna have two sons, John and David, four grandchildren and four great grandchildren.

John lives in Limerick with his wife Celeste. His youngest son is Colan while his daughter is Danna-Marie Blackwell. She has two boys - Daniel and Joseph. John has another son Christian, who lives in Queensland with his wife and two children. David Early lives in London and his son is in Sydney. The Early family may be spread far and wide but they are all delighted about the news at home.

“The papal blessing will be treasured by my great grandchildren in the future. It is a piece of history,” said John.

While Pope Francis has been now been elected, Pope Benedict will forever have a special place in the Early family’s thoughts and prayers.