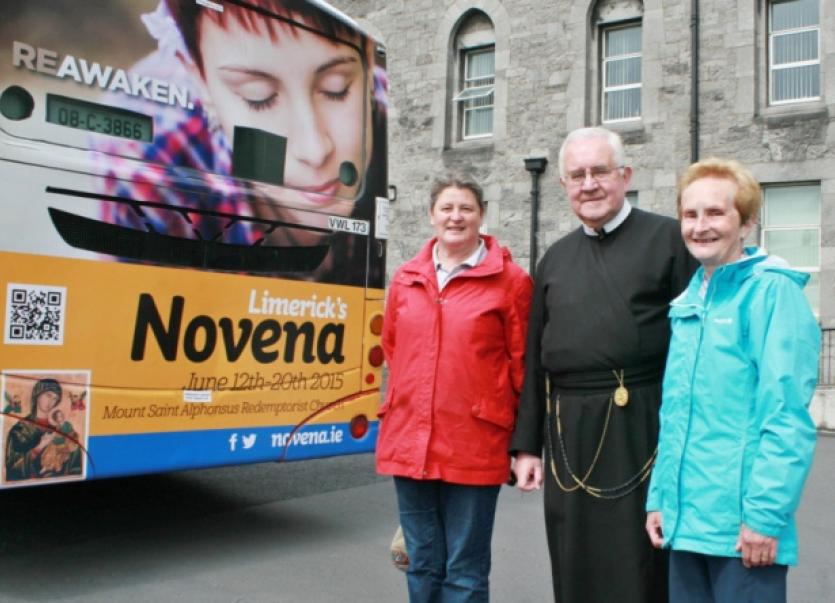 FEW festivals in Limerick manage to attract crowds of up to 10,000 people a day, for nine days in a row.

FEW festivals in Limerick manage to attract crowds of up to 10,000 people a day, for nine days in a row.

But Limerick’s “festival of faith”, the annual solemn novena in honour of Our Lady of Perpetual Help, is a festival of prayer, gratitude and hope.

It also marks the high point of the preaching ministry for the Redemptorists at in Mount Saint Alphonsus on the South Circular Road. The recently appointed rector, Fr Seamus Enright said there has been an ever greater advertising drive this year to promote the novena, “as we feel there’s a whole world we don’t have contact with that we’d like to tap into”.

“Pope Francis has been urging people to step out of their comfort zones, get out on to the streets, and on to the periphery, and we want to do that,” Fr Enright told the Limerick Leader.

Adverts for the novena now appear on Google, and on the back of two Bus Eireann buses in the city. “We want to bring the novena to a wider audience. We’re hoping for big crowds again, and it has held fairly steady. We want to suggest to people who may not go to church regularly that perhaps this would be something they might like to explore,” he said.

After the marriage referendum passed, he reiterated the message that the church is open to everyone. “You’d be hopeful that what the Yes vote has achieved is to bring an end to a world of discrimination and oppression. It has signalled very strongly that there’s no place in Ireland for homophobia, or marginalising or excluding people, and I think that’s one of the positive outcomes.

For the novena, he said they will be reflecting on one of Jesus’s parables for each of the nine days, and see what might it say to people today. “People can be drawn in to the parables unsuspectingly, and then find it is about themselves. It is like holding a mirror up,” he said.

Fr Enright has been based in Limerick for the past 13 years, and prior to that between 1980-84, and as a native of Limerick, the novena has always been close to his heart. “I think I come away each year with my own faith nourished. I feel nourished by the faith of the people who come, and likewise I think they feel nourished. It’s very much a people’s novena.”

One particular moving aspect to the novena is the petitions people write to pray for their own special intentions, some of which are read out anonymously from the pulpit.

“I told a politician one time he need never do an opinion poll to find out what the issues in Limerick are, you just have to read the novena prayers. At present they are about exams, employment, financial issues and family life, because the economy has put people under enormous pressure.”

St Anthony’s solemn novena will be held in St John’s Cathedral in the city from this Friday June 5 to Saturday June 13. Conducted by Fr Tom Ryan, parish priest in Shannon, mass will be celebrated each day at 10am and 5.45pm. Mass will be held at 10am and 6pm on Saturday and 10.30am and 7pm on Sunday. On Tuesday, June 9, the blessing of expectant mothers will take place after the evening novena, while the anointing of the sick will take place at 10am on Wednesday June 10. The blessing of children will take place at the school hall in St John’s Girls’ and Infants Boys’ School on Thursday, June 11 at 9.15am. Blessing of lilies takes place on the final day of the Novena.