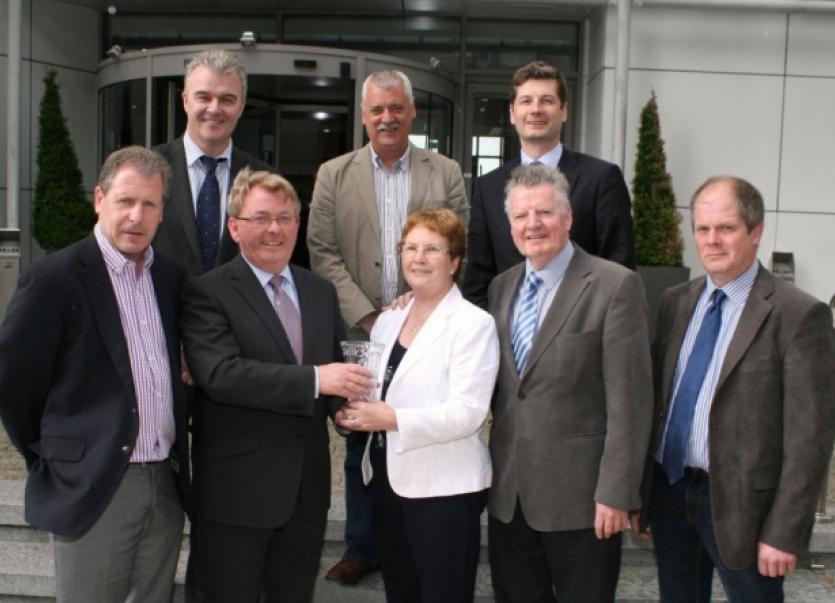 THE people behind a “unique, spellbinding and powerful” performance of The Passion of Christ last Easter have been honoured with the Limerick Person of the Month award.

THE people behind a “unique, spellbinding and powerful” performance of The Passion of Christ last Easter have been honoured with the Limerick Person of the Month award.

On Holy Thursday and Good Friday in the region of 5,000 pilgrims descended on the hillside in Nicker, Pallasgreen for a one-off re-enactment of the death of Christ.

Passion 2014, which was played out in various locations in the parish – right through Holy Thursday night – involved a cast of more than 20 local people, aided by a strong production team. In the end, according to director/producer Eamonn Harty, the entire local community – a population of almost 1,000, played some part in the unique production.

“We brought Verona to the foot of the hill of Nicker,” smiled Eamonn this Monday afternoon as he joined a group of locals at the Clarion Hotel in Limerick to accept the person of the month award, on behalf of all those involved in Passion 2014.

“We had a notion that what we were doing was something special. The whole thing went off better than we ever could have dreamed. It was received very well by everybody – people loved it and connected with it. It’s not over yet – we’ll see what RTE does with it next Easter.”

The national broadcaster is to air a documentary based on Passion 2014 – which is expected to be at least an hour long.

The idea for Passion 2014, came about, Eamonn says, after he came across “a passion play” in Cashel “by pure accident” in 1991.

“That play was something you watched – we wanted people to get involved, and boy did they get involved.”

He decided there and then that they were going to do something on the most famous story in the world. A fire was lit in the Pallasgreen man’s imagination and over the next 23 years he moulded his ideas into Passion 2014. “On Good Friday morning people just gathered, sat down by a rock and for 45 minutes there were no words, nothing, people just stood in silence,” he recalled of the scenes that unfolded on April 18 last.

“That’s the kind of thing that I love. People were trying to get as close to the action as possible.”

Scenes from the Garden of Gethsemane were recalled on the lawn of the parochial home of parish priest Fr Pat Byrnes on the Thursday night, and then moved to other locations through the night. The crucifixion itself was re-enacted on Nicker Hill, where thousands of the faithful gathered.

“People would come up and shake his hand,” Eamonn recalled.

Dress maker Nell O’Neill from Pallasgreen designed some 30 costumes for the re-enactment.

She learned of her role last October “and that was it”.

Apart from taking a break over Christmas, Nell worked on the costumes most days. She researched what the outfits should look like and received help from Eileen Hayes and Hannah Docherty in achieving the finished product.

The sandals and the metal Roman suits came in from America. Berkery Leather Products of Doon made the soldiers’ outfits. Nell purchased most of the material for the other costumes from Guineys and would make them from scratch.

After working right up to the last hour on the outfits, she then sang in the choir for the event.

While she admits she was tired after it all “we were on a high after it - it took nearly two weeks to get down off the high”.

Mike Delaney from Pallasgreen oversaw the sound and music for the production. “It was a complex operation but we pulled it off,” he smiled.

Ger O’Connell was involved in the media and promotions aspect of the event along with Dara Fraher, Suzie O’Kelly and Mike Gleeson.

“We had a corporate night in the Woodlands House Hotel in Adare and also an official launch night in the Ballykisteen Hotel which were very successful,” Ger explained.

“People came away from those nights enthralled by what had happened before them. There are so many people to thank and without their help and generosity I don’t think it would have been possible to stage the event.”