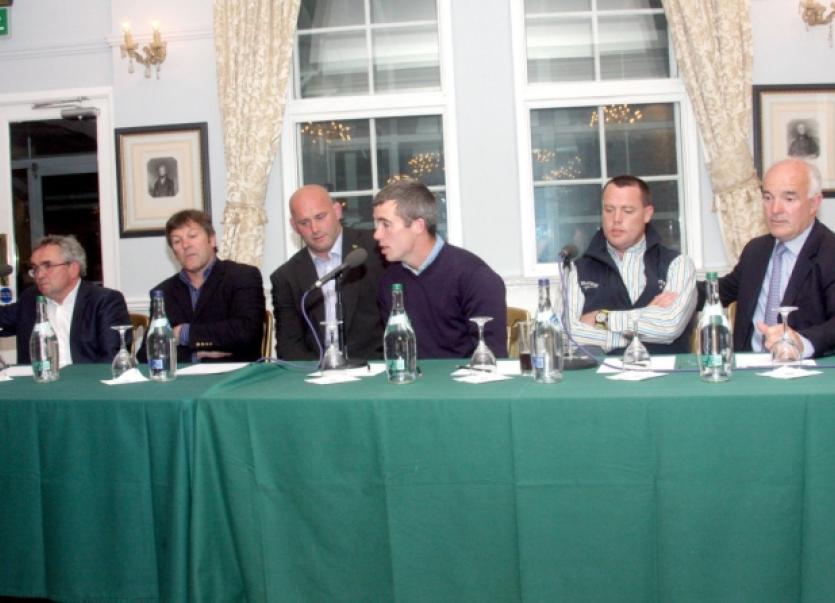 IT came late in the evening, but it meant the world.

IT came late in the evening, but it meant the world.

Just as the closing speeches were being made at the launch night of the Limerick Harriers Point-to-Point in aid of injured Limerick jockey JT McNamara, Fran Stone from Ardpatrick stepped forward with a cheque for €10,000.

“This is for the JT fund on behalf of trainer Paul Cashman [of Rathbarry Stud in Fermoy] and his wife Susan. They had a collection at their wedding last month. Instead of people buying drinks at the bar they had a free bar, they asked for donations for JT,” she explained.

The gesture was a fitting end to an event which has started over an hour earlier with bar staff at the Dunraven Arms Hotel in Adare carrying extra chairs into the function room to cater for the huge attendance. They had expected 80; more than 200 turned up.

Tom Busteed, MC for the night, opened the proceedings by giving the guests an update on how JT is doing.

“He is in great spirits,” said Tom of the popular jockey who is continuing his recovery at the Mater Hospital in Dublin after suffering serious injuries in a fall at the Cheltenham Festival last March.

“I spoke to him on Tuesday,” Tom continued, “and he spoke at length about different things including horses – about his own yard, about my yard and the different horses. He is in really good form, really good form which is great to see.”

All funds from the point-to-point which takes place at Lemonfield, Crecora on October 27 will go towards assisting JT in his rehabilitation.

“We want him to be able to hug his kids and hug Caroline and maybe turn on At The Races and watch a bit of racing. That’s what it’s all about,” said Tom, who introduced the guest panel on the night including trainer and RTE racing commentator Ted Walsh, Bruree-based trainer Enda Bolger, former Munster and Ireland rugby star John Hayes, Liam Healy of Healy Photography, champion point-to-point rider Derek O’Connor, and artist Peter Curling.

Giving an insight into JT’s personality, trainer Ted Walsh said as a human being, “he is a real man’s man”.

When asked by Tom Busteed at what point he realised he had something a bit special in JT, trainer Enda Bolger – who enjoyed many good days with JT on the racetrack – replied: “Special is the right word”.

“If he wasn’t coming in tomorrow, he would let me know two days in advance. If we were starting at seven o’clock, he would be there at a quarter to seven – just so, so reliable.

“On a couple of occasions, he’d say to me ‘will you turn down that feckin’ Springfield’,” joked Enda in reference to his own fondness of Bruce Springsteen’s music.

“I think it’s a great sign in a guy, as an amateur rider, when professionals hold you in high respect whether it was McCoy or Ruby or Charlie Swan, whoever was the leading rider at the time – they held him in high regard. He could hold his own with those guys.”

Six months after the accident, Ted Walsh said JT is getting as many visitors as ever.

“I must say the racing community and the wider community, the way they are rallying around something like this is inspiring – to know there is so much goodwill, that will carry him through, hopefully for the rest of his life.”

The point-to-point will be followed by a dance at Limerick Racecourse at 8pm and will include an auction, music by Shaun O’Dowd featuring Hanora and a disco with Ray Nash. For further details email doreedel@gmail.com or phone Edel Dore on 086 8709613 or Tommy Kelly on 087 9139103.